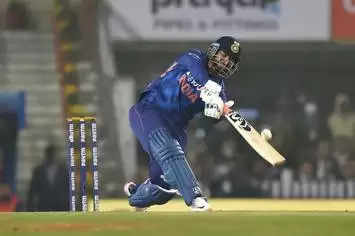 India came into the 2nd T20 against England with a 1-0 lead after a massive win on Thursday. The first T20 was won by 50 runs, as Hardik Pandya’s all round game won the Rohit Sharma led side. India if they win this game will continue their tradition of never losing a T20 series to England. The match saw England win the toss and chose to bowl as they made 2 changes. India also had a few changes as all the 4 big names who were rested for the last game made a comeback.

India had dropped Ishan Kishan to make way for Rishabh Pant who opened the batting with Rohit Sharma. The moment happened when Sam Curran was bowling the first over of the game. Pant got a yorker which he dug out to take a single to take a single and get off the mark. Sam Curran apparently was in the line of Pant’s running between the wickets. This did not please the 24 year old who was heard on the stump mic saying “Saamne aa gaya yaar. Saamne aa gaya tha.. takkar mar du kya?” (He blocked my way, do I Push him aside)

Batting first India started like a fast train as they scored 61 for 1 from the first 6 over as Rohit was out for quickfire 30. The Indian captain looked in good form before he was caught by Buttler off Gleeson. The 34 year old Gleeson was making his debut for England and he got the wickets of Kohli for 1 and Pant for 26.

India kept losing wickets but Ravindra Jadeja played some amazing shots to score 46 off 29 balls with 5 fours. This was his best score in T20 cricket for India as he helped India reach 170 on the board, despite wickets falling at the other end. Jordan continued his good form with the ball as he picked 4 wickets with the ball while Gleeson got 3 wickets.