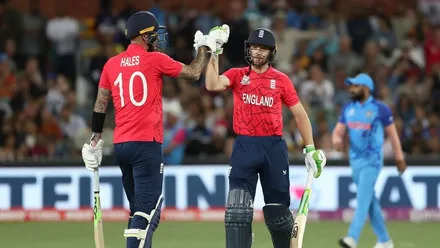 It was a miserable day for the Indian cricket team and its fans which saw heartbreak and tears. England showed their might to win the game by ten wickets against a hapless Indian bowling unit at the Adelaide Oval.

The win gives Jos Buttler and England a chance to win a 2nd ICC silverware in 3 years after winning the title in 2019. Pakistan who had made the final by beating New Zealand will see a repeat of the final of the 1992 world cup final at the same venue at MCG.

Indian bowling were tasked with the challenge of defending 169 to win the game and reach the finals. The Indian bowlers Bhuvneshwar Kumar began by giving 25 runs in 2 overs.

The Indian bowling and fielding was a mess as there was loose deliveries on offer. The Indian fielding was also subpar as there was moments on the field which may have seemed comical. The fielding efforts though did not win any fans amongst the Indian cricket fans or the national captain Rohit Sharma.

The incident happened in the 2nd ball of the 9th over which was bowled by Hardik Pandya. The English skipper Jos Buttler went up for a scoop shot and the ball went down to the fine leg. Mohammad Shami gave a gingerly chase as he got to the ball.

Shami went for an underarm throw to his fast bowling comrade Bhuvneshwar Kumar who made a meal of it. Kumar, ran after the ball and the English batters ran hard to complete an all run four.

This enraged the Indian captain Rohit Sharma as Hardik Pandya was crestfallen and couldn’t believe what he saw. The Indian skipper was seen giving a piece of his mind to Shami and Kumar for being tardy in the field.

India cricket fans weren’t pleased with the efforts of Shami and Kumar as they took to twitter to have their say. You can read all the tweets below.

Arshdeep and shami are going to be labelled traitors again??? #INDvsENG