Watch! Rohit Sharma comes up with an hilarious response to Pragyan Ojha statement on Shikhar Dhawan 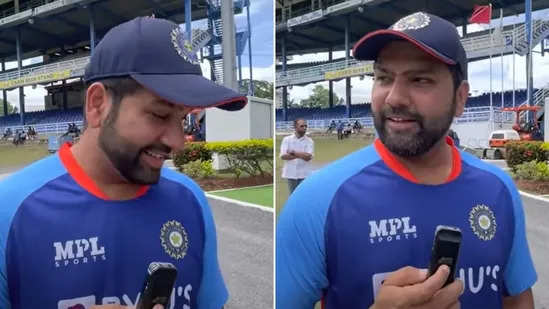 Rohit Sharma is back at the saddle of the Indian captaincy as he gets ready to lead his team in the five match T20 series against West Indies. The Indian team has just white-washed the West Indians in the 3 match ODI series with a 3-0 margin under Shikhar Dhawan. The two teams lock horns in the first game at the Brian Lara stadium on Friday at Trinidad and Tobago. India welcomes back some of its regulars like Rishabh Pant, DInesh Karthik and Hardik Pandya. The 5 match series against the two time world champs will serve as a good preparation for the T20 World Cup which is to be held in Australia in October.
Pragyan Ojha questions Shikhar Dhawan's absence from the T20 team -
Shikhar Dhawan who was the skipper of the ODI side had the rare distinction of becoming the only India skipper to whitewash the West Indies. Dhawan though hasnt been considered for the T20 format for a long time. Despite his steady performances with the bat during the 2022 season of TATA IPL. This has raised a lot of questions, despite Dhawan stating that he still wants to Play the T20 format for India. Former India player turned commentator, Prgyan Ojha recently questioned the reason why Dhawan wasnt included in the T20 scheme of things. Ojha had said "They have both done a brilliant job together. I think in world cricket they are third or fourth [sic: fourth highest in ODIs as an opening pair] and Rohit believes that if someone is consistently performing or has done really well over the years, he can't be discarded. Rohit definitely gives you that cushion and it's a good thing, because in ICC events, you need that little bit of experience. Rohit has said this and he is sticking to it. I am confident that Shikhar will be in the mix unless there is some forced change"
Rohit Sharma responds to Ojha -
Ahead of the first T20, Captain Rohit Sharma was talking to the press when one reporter who goes by name Vimal Kumar asked him "You old friend Pragyan Ojha has commented that the way Tendulkar and Ganguly' professional relationship turned into a friendship by opening the innings together, Shikhar and you have part of a friendship too. Tell us something about it?. Rohit Sharma played with Ojha first at Deccan Chargers then at Mumbai Indians. Ojha and Rohit won the title under GIlchrist in 2009, while Rohit was the captain for Mumbai Indians in 2013 when Ojha played a huge part in the title win. To this the Indian captain said "Pragyan? Pragyan aaj kal commentary karne laga hai kya? Sahi hai, chalo achhi baat hai (Pragyan? Has he started doing commentary? Well, alright, it's good)"
Rohit Sharma too like Virat Kohli hasnt been having a great time with the bat in recent times. The Indian captain hasnt made a big score till now post his 127 agaisnt England at Oval in the test match. His only 50 came against England when he scored 76 at Oval during the first ODI. Rohit and his fans will hope to have him back amongst the runs in quick time.