Watch! Rohit Sharma leaves everyone amused with his reply to an Indian Journalist 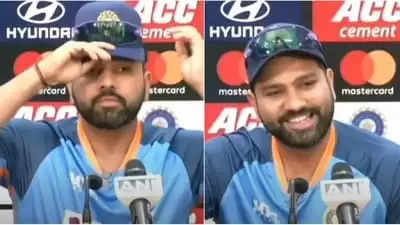 Rohit Sharma is a man who is under the microscope as he is set to have a testing time for India. The 35 year old will be seem leading the Indian team in two home series against Australia and South Africa. Rohit Sharma will then be tasked with the charge of leading India during the T20 World Cup, which takes place in Australia. The 35 year old will want to win their first ICC title in over 9 years.

India is set to face Australia in the first T20 on Tuesday at Mohali. This is a short series where 3 T20 matches will be played between India and defending T20 champions Australia. Rohit Sharma was attending a press conference where the entire event unfolded.

Rohit Sharma leaves everyone in splits –

Indian  journalist during the course of the press conference asked the Indian captain a slew of questions. The scribe began with the Indian captain’s observation about the team composition, followed by the impending retirement of Jhulan Goswami. Rohit Sharma replied “kitne sawal puchte ho”.

During the press conference on Sunday, the Indian skipper had his say on the likely Indian opening combination. Sharma said “Rahul will open for us at the T20 World Cup. We are not going to experiment with that position a lot. His performances often go noticed. He is a very important player for India. If you look at his performances over last two three years, it has been very good. I want to make it clear to everyone that we have absolute clarity on this and kya khichdi pak rahi hain we know it very well. There is no confusion”

Ever since the end of 2019 and in recent times especially, one player who has hogged the limelight owing to his form has been former India skipper Virat Kohli. Speaking about Kohli’s form, Rohit Sharma said “Rahul bhai and I have had a chat that we will have to make Virat open in some of the games because he is our third opener. In the last match, we saw what he did (as opener) and we are obviously happy about that”