Watch! Rohit Sharma loses his cool at Karthik and Chahal during the 1st T20 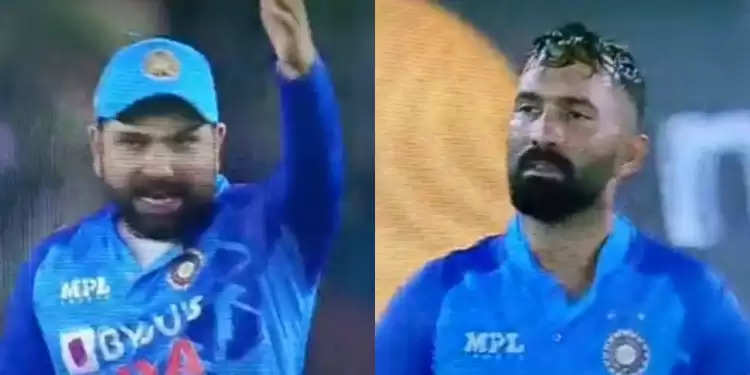 Indian team and its fans wore a sad look at the end of the 1st T20 at the IS Bindra stadium at Mohali. Australia chasing a massive 209 on the board, wont the game by 4 wickets to spare and 3 balls remaining. It was yet another disappointing outing for the Indian bowlers with specially during the death overs. Rohit Sharma, cut a frustrated figure with every passing minute on the field.

Indian captain Rohit Sharma was seemingly getting frustrated by the minute. The chase of 209, began with Aaron Finch slamming Bhuvneshwar Kumar for a huge six the very 1st ball of the chase. The 2nd over was given to Umesh Yadav, and he too was taken to the cleaners by Cameron Green. Chahal was bought in early, to give India a wicket and stop the early momentum for Australia.

Rohit Sharma shows his angry side –

Cameron Green, against the run of play went for a sweep shot against Chahal. There was a ripple of an appeal, but none too serious. When the replays came onto the big screen though, the entire incident unfolded. It was seen that not only was the ball pitching in line, but also hitting the wickets. Had India gone up for the DRS, Cameron Green would have been out early. The replay did not seem to please Rohit Sharma one bit as he was seen having a go at Chahal and Dinesh Karthik.

Australia start of in blazing form –

Aaron Finch, who has been under the pump owing to bad form, seemed to slug it off. The Australian captain scored 22 runs before being bowled by Axar Patel. Cameron Green and Steve Smith though kept the pressure going. The pair added 70 runs in mere 40 balls to help Australia to reach 109 in the first 10 overs.

Triple strike helps India get back into the game –

The first ball after the 10 over drinks break, saw Cameron Green fall to Axar for 61, when he was well caught by Kohli. Smith then welcomed Umesh Yadav with a 6 and a 4. The 3rd ball though saw him edge behind to Karthik, the Indian team went up for DRS and got the decision in their favor. Maxwell too was out for 1 when DK and Yadav combined again the same over and yet another DRS appeal went India’s way.

The fall of Maxwell, saw Australia needing 86 runs from 8 overs with 6 wickets in hand. Josh Inglis played some intelligent strokes to get the Australians back into the game. Axar Patel bowled him round his legs for 17. Matthew Wade though spoiled the party for India as he smacked 21 ball 45 with 6 fours and 2 sixes. He was ably supported by Tim David, who was making his debut and scored 18 off 14 balls with a four and six.

Harshal Patel, playing his first match in a while gave away 22 runs in the 18th over, when Australia need 40 off 18. This got the equation down to 18 runs from 12 balls. Bhuvneshwar Kumar yet again proved costly as he was taken apart in the 19th over which seems to have become a reoccurring theme.

The normally safe Indian fielding too was under the pump. It began with Axar Patel dropping an early chance. It was followed by two drops, first by Umesh Yadav then by KL Rahul. Towards the back end of the innings, even Harshal Patel had a chance to hold onto a return catch.