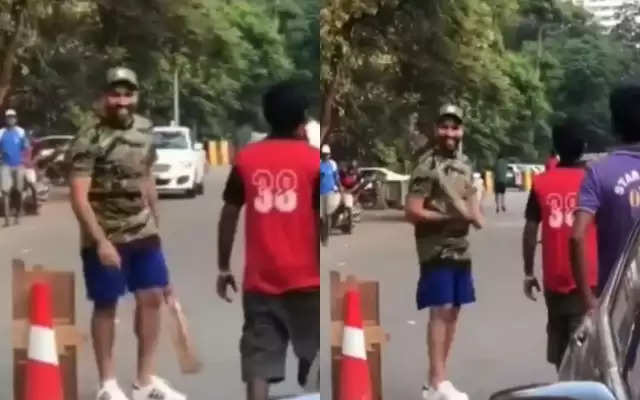 Indian cricket team is all set to tour England for the sole test and a few white ball games starting 1st July. The likes of Kohli, Rohit, Bumrah and Pujara have already left India to play the reschedule test at Birmingham. India will also be playing a short series against Ireland which will include 2 T20 games. Rohit Sharma has been rested for the ongoing 5 match T20 series against South Africa. The Indian captain had a forgettable IPL as he personally suffered a loss in form and also saw his team finish bottom of the table.

For any kid growing up in India, it is always a fun time to pick up the bat and round off some friends and play cricket. Every player who has played the sport, professionally has played street cricket. Rohit Sharma recently was spotted playing with some of his fans at Worli, a suburb in Mumbai. The 35 year old could be seen batting and hit the ball far and wide in the 9 second video that has found its way onto Twitter.

Rohit Sharma was given the captaincy of the T20 and ODI side late last year and the charge of the test team early this year. Rohit won the series against New Zealand, West Indies and Sri Lanka in the T20 format. He also led India to a clean sweep in the 2 match test series against Sri Lanka. He suffered a loss in form during the IPL where he failed to register a single half century. Mumbai Indians for the first time at the bottom of the table. Rohit Sharma will also be seen leading India in the Asia Cup and also the T20 world cup later this year in Australia. Rohit who has 5 titles as the IPL captain will want to replicate the success with the men in blue.

It is good to see Rohit Sharma in a relased frame of mind, but the fans will hope he can show his old form and help India win some silverware in his India captaincy stint as well.