Watch! Rohit Sharma wins the hearts of the Twitter-verse with his gesture towards a young fan 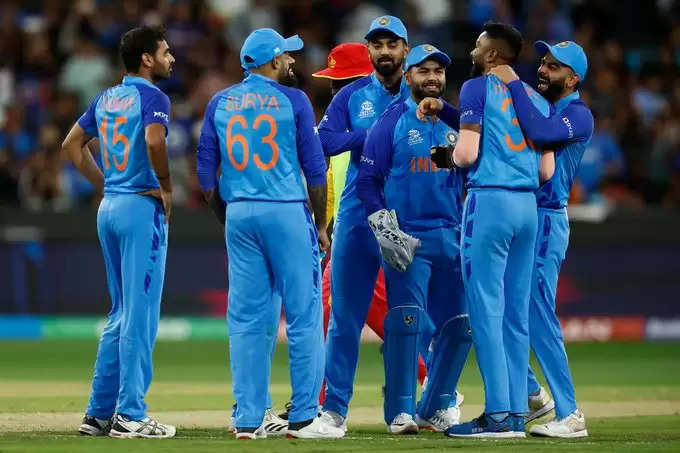 India on Sunday beat Zimbabwe by 71 runs to go top of the table and confirm their place to take on England in the Semi Finals. The Indian team under Rohit Sharma just had to beat Zimbabwe to take the top spot.

This was after Pakistan took that spot for a few hours after an unbelievable few hours which saw South Africa get knocked out by Netherlands. The win over Bangladesh gave the Pakistanis a rather lucky and unlikely place in the semi finals to take on the Kiwis.

Rohit Sharma wins the hearts of the fans at MCG –

Rohit Sharma has an equal amount of fan following and craze as much as Virat Kohli amongst the Indian fans. A young Rohit Sharma fan invaded the ground in a bid to get closer to his idol. The security tackled him on the ground as the fan’s Indian flag also slipped out of his hand.

Seeing this Rohit Sharma and Mohammad Shami ran to the aid of the youngster. The Indian captain was seen having a few words with the security staff as the young fan was being taken away from the ground. It is learnt the fan was in tears when he went close to Rohit and has been slapped with a huge fine for him invading at MCG.

Rohit fails yet again as Rahul scores yet another 50 –

India batted first after winning the toss and Rohit Sharma yet again failed to put a substantial score on the board. The 35 year old scored 15 off 13 before he was caught by Masakadza off Muzarabani.

KL Rahul scored his 2nd successive half century as he scored 51 off 35 balls with 3 fours and 2 sixes. The 30 year old played some delightful shots to get to his half century his 2nd in a row after his half century against Bangladesh. Rahul was caught by Masakadza off Raza while going for his 3rd six and the 100th of his T20I career for India.

SKY soars yet again with a quick half century –

India faced a minor setback as they lost Kohli for 26, Rahul for 51 and Pant for 3 in a space of few overs. It was the 65 run stand between Pandya and SKY that got India going. Pandya scored run a ball 18 with 2 fours to his credit, but SKY was batting on another planet.

Surya Kumar Yadav who is the world number 1 T20I batter scored 61 off 25 balls with 6 fours and 4 sixes. He cut, pulled, hoicked and played shots all across the turf to score yet another half century in the tournament to take India to a resounding 186 on the board.

You can read all the twitter reactions from the fans in the tweets embedded below.

Good fight by Zimbabwe but for India it was a great practice match and opportunity to improve personal records lol 😂 Surya is a star and Ryan Burl’s catch was superb! #WorldCup2022 #WorldCup #Surya #Burl #INDvsZIM