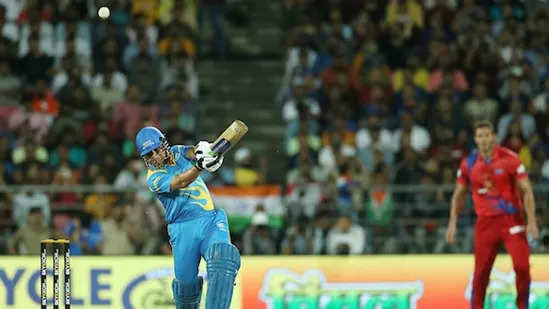 Sachin Tendulkar may be retired from the sport nearly 9 years ago, but he still has an aura about him. The 49 year old still evokes memories of childhood whenever he steps on the field with the bat in hand. Tendulkar, is currently leading the Indian legends in the 2022 season of Road Safety World Series. The Indian legends team were facing off against the England Legends at the Rajiv Gandhi Stadium at Dehradun.

The story as it occurred –

Indian Legends team were playing England Legends at Dehradun. The tournament had seen a few washouts due to the inclement weather. The game on Thursday also saw a delayed start due to wet outfield conditions. Once the match was deemed fit to start, it was rescheduled to be a 15 over per side game. England won the toss and put the Indian team to bat first.

Indian legends began the innings with Naman Ojha and Sachin Tendulkar at the crease. The Indian openers began the game in an aggressive fashion. Sachin Tendulkar then went berserk to give fans a glimpse of his old self. He first paddled scooped Chris Tremlett for a six. Tendulkar, then stepped down the track like in his prime to hit the pacer for a six. Tendulkar then followed it up with yet another boundary to leave the fans crazy.

The carnage from the bat of the little master wasn’t done as he smacked 2 more fours and a six off his blazing blade. Tendulkar was out for 40 more just 20 balls with 3 fours and equal amount of sixes when he was caught and bowled by Chris Schofield.

Post the show from Sachin Tendulkar, Yusuf Pathan began going after the English bowlers. Yusuf scored 27 from 11 balls with a four and 3 big hits. Yuvraj Singh was not out on 31 off 15 balls with 3 sixes and a four. Stuart Binny scored a 11 ball 18 with 2 fours and a six, Irfan Pathan then flexed his arms to score 11 with a six from 9 balls.

Indian bowlers help the team to an easy win –

Chasing 171 to win from 15 overs wasn’t going to be easy for the English batters. Phil Mustard and Dimitri Mascarenhas though began the chase well. Rajesh Pawar though started the rot as he had Mascarenhas bowled for 12. Mustard top scored with 29 from 19 balls, while Tremlett was the 2nd highest scorer with 24. Pawar picked 3 wickets for 12, while Gony, Pragyan Ojha and Binny picked a wicket each. India won the game by 40 runs.

The exploits of Sachin Tendulkar with the bat, had the Indian fans going crazy as they wanted BCCI to pick the 49 year old for the 2022 T20 world cup. Another user wondered if we were still in 1998. One thing is for sure, the aura and class of Tendulkar still remains intact.

Let Virat Kohli bat at No.3. Because if you require a back-up opener for T20 World Cup, there’s one batting in Dehradun right now

God of Cricket for a Reason😎 #SachinTendulkar pic.twitter.com/m0peYLEu8B

Sir why you retired we'll missed you and your those Eye 👀 Catching shots❣#SachinTendulkar . #LegendsLeagueCricket pic.twitter.com/0liGrmpRQb