Watch! Sanjana Ganesan makes fun of the English team during the 1st ODI 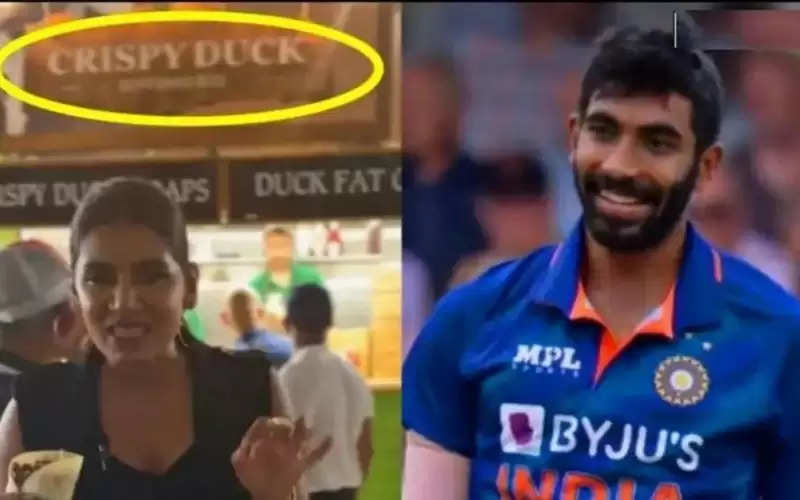 Jasprit Bumrah on Tuesday was breathing fire when he dismantled the English batting with a brilliant 6 for 19. This was best ever bowling figures in ODI cricket as it helped India win the game by 10 wickets. England were bowled out for 110 in the first ODI and Rohit Sharma with 76 and Dhawan with 31.

Leading sports presenter Sanjana Ganesan is married to Jasprit Bumrah and is currently in England for the Indian tour as a presenter. During the break for the broadcaster Sony Sports Network, Ganesan made fun of the ducks that the English batting unit have put together. There were four ducks in all as Roy, Root, Stokes and Livingstone all failed to make their mark and were out without opening their account.

Bumrah took the second new ball and he had Jason Roy in all sorts of trouble. The misery for the right hander ended when he dragged the ball back onto his stumps for a duck. In came in-form Joe Root as he played out the 1st ball but the 2nd ball though reared up and Root helplessly saw the ball take edge to be caught by Pant for 2nd ball duck. After the end of Bumrah’s first over the English team were 6 for 2

Bumrah’s finishes with his best spell –

Bumrah wasn’t done as he got the wickets of Bairstow caught behind for 7 by Pant, while dismissing Livingstone for a duck as well with a yorker. Shami got the key wicket of Stokes who was batting at 4 caught by Pant for a duck. As England lost half their side even before the score could read 30. Bumrah then came back to remove the tail enders to complete his 2nd fifer in ODI cricket. He first got rid of Brydon Carse with a beauty and then got rid of David Willey who was looking to score runs with just Topley for company. Bumrah finished with 6 for 19 which was the best ever figure for an Indian against England beating the 6/23 by Ashish Nehra.