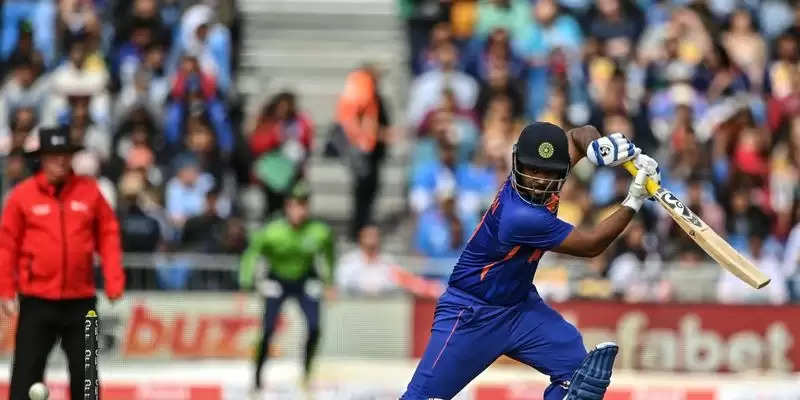 Shikhar Dhawan was a happy camper as he was all smiles after India pulled off a famous win on Sunday. Chasing 312 to win, Axar Patel did the star turn with the bat as he scored 35 ball 64 not out. This enabled India to win the game by 2 wickets with 2 balls to go and also take an unassailable 2-0 lead in the 3 match ODI series. One of the architects of the win was Indian wicket keeper Sanju Samson who scored an amazing maiden half century.

Sanju Samson falls to a freak run out –

The incident happened in the 3rd ball of the 39th over with India still needing 108 runs and 6 wickets  in hand. Samson was batting well of 54 runs off 50 balls as the 27 year old was looking to take the team home. That’s when Shepherd bowled one full and Samson got an inside edge. The ball went to short fine leg and the two batters, Samson and Hooda scampered for a quick single. Mayers gathered the ball and threw the ball to the bowler, Shepherd though wasn’t able to grab the ball as it hit his legs and went to hit the stumps on the ricochet. Samson was caught short of his crease and was out for well played 54 to leave India at 205 for 5.

Samson scores an impressive half century –

Sanju Samson made his ODI debut for India during the ODI series against Sri Lanka last July under Dhawan. He made a 46 on debut and has always been lauded for his impeccable timing with the bat. Samson couldn’t do much with the bat on Friday during the 1st ODI. On Sunday, the 27 year old was in his elements as he smacked 3 beautifully timed fours and 3 massive sixes. Two off them coming off Hayden Walsh over the covers on each time. Samson got to his first half century just when India were struggling to time their chase.

Binding the team together –

Samson walked in when India were 79 for 3 and had lost the wicket of Surya Kumar Yadav for 9. Samson first added 99 runs for the 4th wicket Iyer as the Mumbai based batter scored yet his 4th successive 50 at the same venue. Post the fall of Iyer, Samson and Hooda added 27 before the unfortunate dismissal of Samson. The commentators were in awe of the timing and some of the shots played during his first international half century in ODI cricket.

The Indian cricket fans were feeling symphatetic and also were in praise for the 27 year old Samson after his knock. You can read all the tweets embedded below.

First half century in ODI’s for Sanju Samson. So many of his fans hope it’s the first of many👏🏻👏🏻👏🏻.

"Samson by name Samson by game. There is an X Factor about him and he is still young"

Ian bishop in commentary box when Sanju Samson is batting is a different joy#INDvWI #SanjuSamson pic.twitter.com/sQKKEp1bpG

#SanjuSamson what an unlucky man . Left thigh right thigh on to wicket for run out#WIvsIND

It's just the beginning many more to come @IamSanjuSamson pic.twitter.com/8JpsCm1Gvr