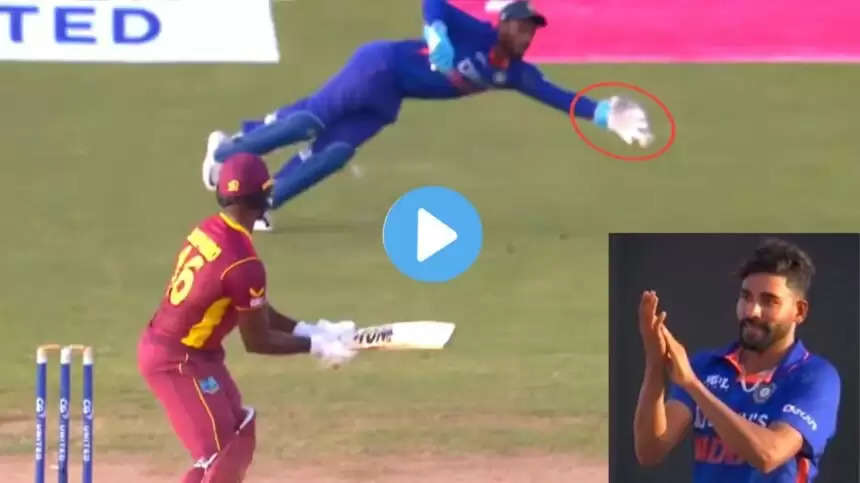 Indian cricket fans who stayed up to see the first ODI between India and West Indies saw a cliffhanger. Indian team held its nerves to win the game by 3 runs to take the lead in the 3 match series. Queens Park Oval at Trinidad and Tobago saw a close battle as the beleaguered West Indian team gave the fancied Indian side a giant scare. Earlier in the day West Indies skipper Nicolas Pooran won the toss and chose to bat first. India went in.with Dhawan and Shubman Gill as the openers. Jadeja was ruled out of the series due to a niggle he had suffered ahead of the game.

Chasing 308 to win,West indies showed spirit and the hosts needed just 15 runs from the final over. Mohammad Siraj was given the ball as he had gone for just 48 runs from his 9 overs and taken the wicket of Shai Hope. The first ball of the over was a dot ball and it was now 15 off 5. The next ball was hit for a single yo make it 14 off 4.

Samson does the impossible -

The 3rd ball of the over saw Shepherd swipe across the line. The ball took an edge and wait for a four to the boundary. This made it 10 off 3 balls. Suddenly Siraj was feeling the pressure and Shepherd was cutting loose. The 4th ball ess hit for 2 runs to make it 8 from 2. The penultimate ball sae Siraj bowl a wild wide delivery down the leg side. Samson put in a goalkeeper like dive to save a certain boundary. Had he not saved it l, India would have conceded 5 extra runs.

With 7 needed from 2, Siraj pulled out a Yorker and all shepherd could do was score 2 runs. The home side needed 5 off 1 and needed to hit a four to take it to super over. Siraj though bowled another cracking ball. Shepherd missed the line of the ball and Samson collected it. The two batters could only get a single as the Indian team celebrated. Shepherd was disconsolate as it was a close game and the hosts lost the game