Watch! Sanju Samson's words of wisdom behind the stumps during the final ODI 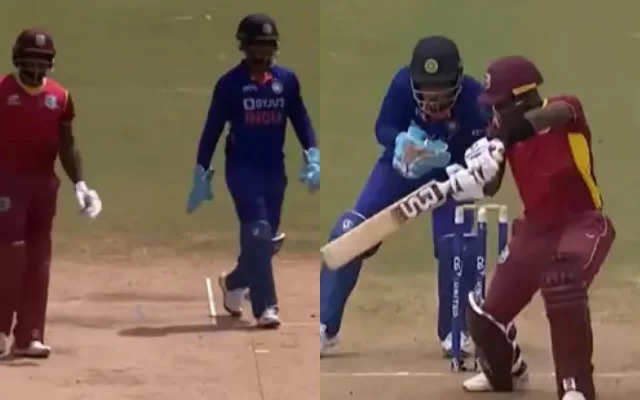 Watch! Sanju Samson's words of wisdom behind the stumps during the final ODI

India and West Indies played the first T20 at Brian Lara Stadium at Trinidad and Tobago which is the first of the 5 T20 games. India come on the back of a successful 3 match ODI series, where India won all 3 games. It was the first time India had been able to achieve this feat against the former twice ODI and T20 world champions.India under Shikhar Dhawan was the star of the show as he led a young Indian team sans some of the big names to a huge series win. One of the stars and finds of the series was none other than 27 year old Sanju Samson who seems to have finally found his feet in International cricket.

The final ODI between India and West Indies was played on Wednesday at the Queens Park Oval ground. The rain affected game saw West Indies chase 257 from 35 overs while batting second. During the course of the game, Axar Patel was being hit for runs and thats when Sanju Samson who was doing wicket keeping said to him "Chal Baapu ab gilli pe wapas aa jao" (Bapu Start bowling stump to Stump)

Sanju Samson before these 3 games had played just one ODI game for India during the Sri Lanka tour last year. Samson scored 46 on debut, after a slow start to the series, Samson came to the fore with a brilliant first ever half century for India. Samson's innings enabled India to a close 2 wicket win .

The Indian selectors added Samson to the mix after it was learnt that KL Rahul had tested positive for COVID 19. Rahul was initially about to be part of the 5 Match series after getting fit from the groin Injury he suffered just ahead of the South African T20 series. Samson has been drafted to the side by the BCCI based on the performances he had put on the field during the recent series