Watch! ShIkhar Dhawan and Darren Ganga involved in hilarious exchange during the toss 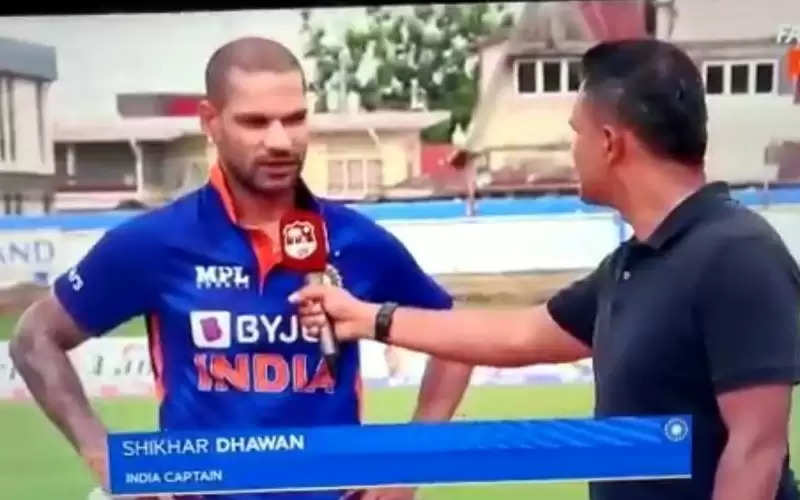 Shikhar Dhawan has been playing for the Indian team for over a decade and is considered one of the senior most members of the team. the 36 year old left hander from Delhi was given the captaincy after the selectors decided to rest Rohit Sharma and other senior members for the 3 match ODI tour of West Indies. Dhawan who isn’t part of the T20 plans for India has stated his desire to be part of the next two World Cups. Dhawan was last leading the Indian side during the short trip across to Sri Lanka last July.

Many of the fans missed the start of the game as there was a funny exchange between Dhawan the captain and commentator Darren Ganga. West Indies won the toss and chose to bowl and it was the turn of Dhawan to step up. Former West Indian opener Ganga asked “What kind of captain are you” . Without blinking an eye lid, Dhawan replied “Cool captain I am a very cool captain. I make sure the team’s energy stays up and of course I love to take all the right decisions and keep the process going”.

Dhawan comes back into form –

Shikhar Dhawan had a series to forget against England with 41 runs on the board. Dhawan scored 31 not out in the first game at Oval followed by scores of 9 and 1 at Lords and Manchester. On Friday, the left hander was in his elements, as he cut, pulled, drove and played everystroke in the book to reach 97. Just as he was set to score his 18th century, he was caught by Brooks of Motie. Had Dhawan scored the 100, he would have become the first Indian ODI batter to score a ODI ton post COVID.

Dhawan began the year with scores of 79 and 29 at Boland Park and 61 at Cape Town during the 3 match ODI series at South Africa. India lost all the 3 games under the leadership of KL Rahul. after playing the IPL, Dhawan enjoyed a break before playing the ODI’s in England. Post the ODI series, Dhawan heads back to India as Rohit comes back to take charge of the Indian team for the 5 match T20 series.