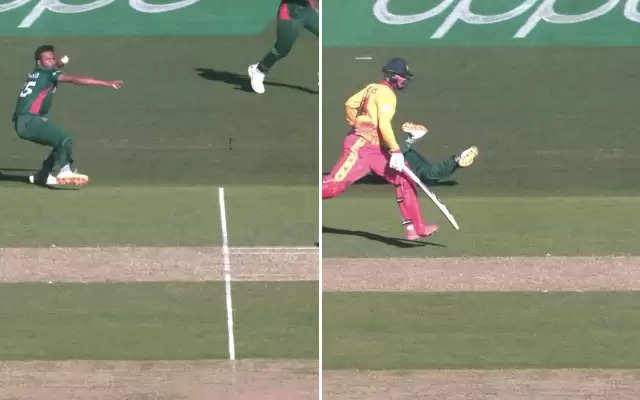 Group 2 of the Super 12 stages was witnessing a triple header for the 2nd time this 2022 T20 World Cup. The first game of the day on Sunday was between Bangladesh and Zimbabwe which was pl;yed at the Gabba in Brisbane. Bangladesh won the toss and chose to bat first.

Zimbabwe needed 19 off 9 balls as Sean Williams was facing Bangladesh skipper Shakib Al Hasan. The wily Shakib bowled a fuller ball to Williams who could only squeeze it and look for a single. Shakib made his way to the ball quickly and slid down and got the ball in one swoop to hit the stumps direct. Williams sank his head in shock as he was out for 64.

This was the ultimate Moment of The Match!
Skipper Shakib Al Hasan with the power throw!
This sealed the match here! #BANvZIM #T20WorldCup2022 #T20WorldCup #bangladeshcricket pic.twitter.com/kohbMkDzEj

Batting first, Zimbabwe bowlers struck early to get Sarkar out for a duck falling to Muzarabani. The 26 year old made it two when he had Liton Das out for 14 off 12 balls. Shanto and Shakib then added 54 for the 3rd wicket with the skipper scoring 23 .

Shanto was out for 71 from 55 balls with 7 fours and a six as his innings and 29 by Afif Hossain from 19 balls helped Bangladesh reach 150 on the board. Ngarava and Muzarabani got 2 wickets each, while Williams and Raza picked a wicket each.

Chasing 151 to win, the Bangladeshis had the opposition all at sea at 69 for 5. That’s when Sean Williams and Ryan Burl got together and stitched a 63 run stand for the 6th wicket. The two left handers went after the Bangla bowlers and hit boundaries at will. Burl was out for 27 off 25 balls with 2 fours and a six.

Williams scored 64 off 42 balls with 8 fours to his name before falling to the amazing run out by Shakib Al Hasan. At that stage the Zimbabweans still needed 19 runs to win from 8 balls to go.

Last over drama ensues with heartbreak for Zimbabwe –

With the final over to start, Zimbabwe needed 16 off the last balls. The first ball was a single as Brad Evans was out in the 2nd ball. Zimbabwe needed 15 of 4 a that stage as Richard Ngarava made it interesting with a four and six to make it 5 off 2. The 5th ball saw Ngarava out stumped to make it 5 runs off 1 to win.

Blessing Muzarabani was out stumped as the fielders all shook the hands and the stumps were drawn. That’s when the drama began, as Bangladeshi keeper had collected the ball ahead of the stumps to effect the run out. This gave Zimbabwe a no ball and a free hit to boil down the equation to 4 off 1. The final ball was a heave and miss as Bangladesh held their nerves to win by 3 runs.