Watch! Shikhar Dhawan entertains the crowd during fielding for India 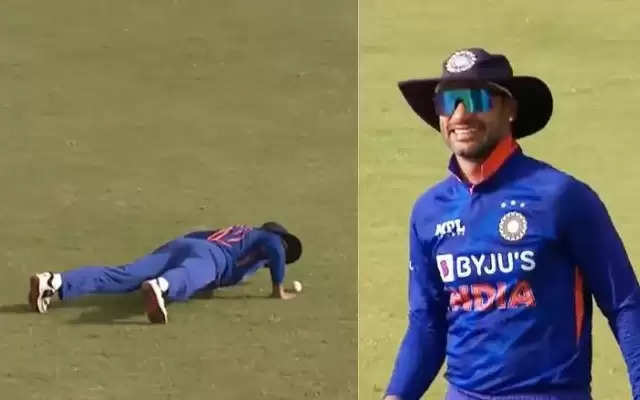 Shikhar Dhawan not only returned to form with the bat, but also was at the forefront of leading India to a close win. Port of Spain ground at Trinidad and Tobago witnessed India sneak home to a 3 run win in a high scoring game. The 2nd ODI which be played at the same venue on Sunday will witness India walk in with a 1-0 lead in the series. The game on Friday night saw the West Indian batters who were under fire give India a massive scare while chasing 309 on the board.

Shikar Dhawan was under pressure as he was seeing West Indies mount a comeback while chasing 309 on the board. The incident in question happened during the latter part of the West Indies chase. The official Twitter handle of West Indies cricket, showed Shikhar Dhawan field the ball and take a tumble, that’s when he started doing push-ups on the spot, much to the amusement and delight of the crowd and the players. WI’s official twitter handle wrote “Gains and tings”

Chasing 309 to win, Siraj got into the act by dismissing Shai Hope caught by Thakur at 3rd man for 7. From there Mayers and Brooks added 117 runs for the 2nd wicket, before Thakur had Brooks caught by Iyer for 46 off 61 balls. 5 runs later it was the turn of Mayers as he was caught by Samson off Thakur for 75 off 68 balls.

Indian claw back into the contest –

When Powell was out, West Indies still needed 113 runs from 13.1 overs, that’s when Brandon King and Akeal Hossein joined forces to add 56 runs in quick time. Chahal was the one who got the big wicket when he had King out for 54 caught by Iyer. When Romario Sheperd came out to bat, the equation was 57 from 33 balls, but the big hitting West Indian took the game deep. Shepherd was not out on 39 off 25 balls with 3 fours and 2 sixes. India took the game by 3 runs and went up 1-0 in the series as West Indies suffered a heartbreaking loss.