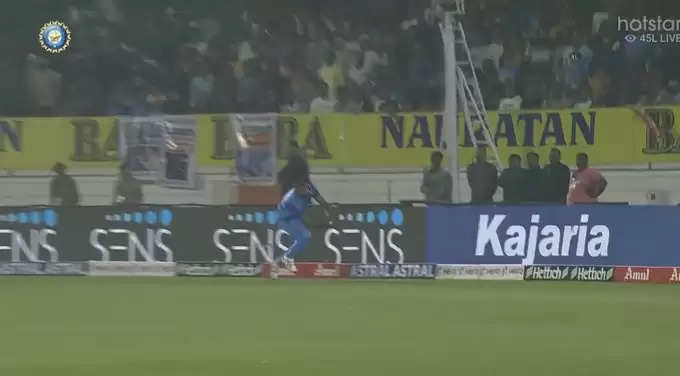 Indian batting finally came good when it mattered the most during the final T20 game at Rajkot. India had lost the Pune T20I by 16 runs after conceding 206 to the rampaging Sri Lankan batting. It was an important game for both the teams who possess some of the best T20 players. Sri Lanka who are the defending Asia Cup champions were looking to take the confidence of the last game as they came to the final at Rajkot.

Chasing 230 to win, Sri Lanka had lost their top order quickly in a space of 3 overs. That’s when Charith Asalanka joined Dhananjaya De Silva and set about the repair wotk. The pair added 33 runs for the 4th wicket in just 20 balls when Chahal was called to bowl.

Chahal seemed to bowl a half volley and Asalanka went after the ball and it seemed it was going for a six over covers. Much to the dismay of the Sri Lankan batter, Shivam Mavi made good run to catch the ball and did not lose his step as Asalanka was out for 19 off 14 balls with 2 fours and a six to leave the Lankans at 84/4.

Kusal Mendis was again showing his talents with the bat when he went after the Indian bowling. Sri Lanka scored 44 runs in just the first 5 overs to leave the Indian bowlers worried. Mendis went for a wild slog off Axar to be caught by Umran for 23.

It was soon a second catch for Umran when a short ball by Arshdeep had Nissanka caught for 15. Skipper Pandya then struck when he had Avishka Fernando who replaced Bhanuka Rajapaksa out for 1 caught by Arshdeep Singh.

The catch by Shivam Mavi left the Indian fans impressed with his efforts and they took to Twitter to have their say. You can read all the tweets below.

What a catch that by Shivam Mavi!#INDvSL

Axar Patel’s incredible batting and bowling form will surely make it next to impossible for Jadeja to find his way back into the national team in T20s.
Very pleased to see Shivam Mavi also bat & field well while being a frontline bowler. #INDvSL @BCCI