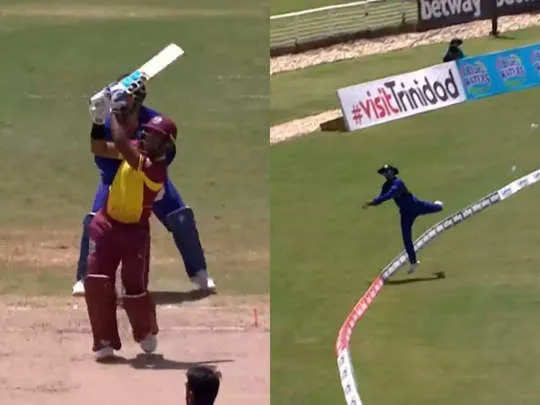 Friday was an exciting as India rounded off their stint at the scenic Trinidad and Tobago with the first T20 at the Brian Lara Cricket Ground. India had played all the 3 ODI games at the Port of Spain ground of Queens Park Oval and came out winners on all 3 occasions. The game on friday was the first of 5 T20 games with the series now moving to St Kitts for the next two games on August 1st and 2nd before finishing off in Florida next weekend. India won the first game in a canter by 68 runs to head into the next game with a one game lead in the 5 match series. India were at their clinical best as Rohit Sharma returned to lead the side after taking a break for the ODI series.

The incident in question happened during the fifth over of the West Indian innings while they were chasing 191 to win. Pooran was facing Ashwin and he went down the track and swung the off spinner over the leg side boundary. While it looked like it was going for a six, Shreyas Iyer intervened as the ball he made a save and threw the ball back into the field of play. The batsmen just took two runs and Iyer saved 4 important runs for the Indian team.

Iyer fails with the bat -

For the first time this series against his favorite West Indian team, the 27 year old Iyer did not score big runs. Iyer had a ODI series to remember with 2 half centuries and a 40 plus score to keep his love affair for Caribbrean bowling goinf. On Friday, the right hander from Mumbai scored 4 ball duck when he was caught by Akeal Hossein of McCoy.

India were dominant in every department on the field of play as they scored 190 with the bat thanks to a 64 by captain Rohit Sharma. During the course of his innings he moved past Martin Guptill to end up at over 3400 T20 international runs to take the top spot. This was also Rohit's first T20 half century for while which included 2 sixes and 7 fours. Towards the end of the innings, it was DK who provided the impetus with 19 ball 41 to help India reach 190. With the ball it was a combined effort from the bowlers as Bishnoi, Ashwin and Arshdeep picked 2 wickets each, while Kumar and Jadeja picked 1 wicket each.