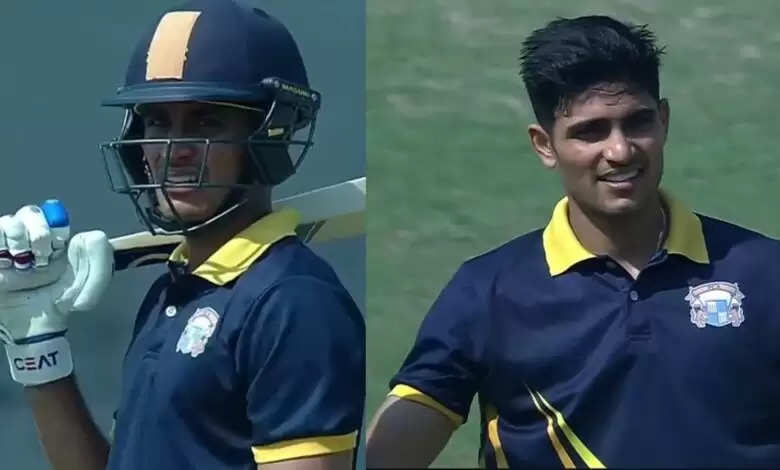 Indian domestic cricket is witnessing the resumption of the 2022 Syed Mushtaq Ali tournament. India’s leading domestic T20 tournament had taken a nearly ten day break for the Diwali festivities. 30th October saw the pre-quarter final being played as the 1st day of November saw the Quarter final being played. One of the leading matches in the QF stages was between Punjab and Karnataka.

Mandeep Singh led Punjab took Karnataka led by Mayank Agarwal at the famed Eden Gardens ground. Agarwal won the toss and chose to bowl first hoping to make best use of the early conditions. Karnataka bowlers did not expect a huge day on the field as Shubman Gill celebrated his call up to Indian T20I team in style.

Shubman Gill on Monday was named in the Indian squads for the T20I and ODI series against New Zealand. The 23 year old opened the batting on Tuesday against Karnataka and scored his 1st T20 century. Gill, scored 126 off 55 balls with 11 fours and 9 sixes in a show of dominance which left Karnataka flat.

Playing in his former IPL home ground, Gill scored 2 runs off the bowling off Krishnappa Gowtham to reach the mark. He celebrated it by removing his helmet and bowing down to his team mates who had assembled on to the dugout and celebrated alongside the young India batter.

Punjab score a mammoth 225 on the board –

V. Kaverappa struck twice for Karnataka when he got 2 big wickets. 1st he dismissed Abhishek Sharma for 4, followed by PS Singh for 4 to leave Punjab at 10/2. Anmolpreet Singh and Gill then added 151 runs for the 3rd wicket as Singh fell for 59 off 43 balls with 9 fours. Sanvir Singh and Gill then put on 44 runs in under 3 overs before Gill was out for 126. Sanvir was out not out 27 off 13 balls with 2 fours and 2 sixes.

Chasing 226 to win, Karnataka lost their openers with the score reading 10. Sanvir Singh 1st ran out Rohan Patil for 2, as Siddhart Kaul had Mayank Agarwal out for 8 caught by Sanvir Singh. Baltej Singh then struck when he had Sisodia out for 6 caught by Anmolpreet to reduce last year’s finalists to 18/3.

Discarded Indian batter Manish Pandey and LR Chetan then added 71 for the 4th wicket as the both the batters showed their intent to fightback. They hit boundaries and ran hard between the wickets. The stand was broken when Pandey, was caught behind for 45 off 29 balls with 5 fours and 2 sixes off Ramandeep Singh.

10 runs later Chetan fell for 33 off 25 balls with 4 f0ours and a six to become Ramandeep’s 2nd wicket. Abhinav Manohar then came out and smacked 62 off 29 balls with 5 fours and 5 sixes, while B. Manoj with 25 off 9 with a four and 3 sixes and K. Gowtham with 30 off 14 with 2 fours and 2 sixes tried to salvage a fightback. The Punjab bowlers kept their nerves as they reached the semis with a win by 9 runs.

Indian cricket fans were thrilled by the display by Gill and took to twitter to have their say on the knock. The century and the eventual win for Punjab left the fans happy and you can read all the tweets below.

Never before was Strike Rate more important than the actual runs scored. With KL & Rohit struggling at the top for far too long, it’s right time for Shubham to break the shackles and cement his spot along with Pant & Samson. We need dashers not draggers.