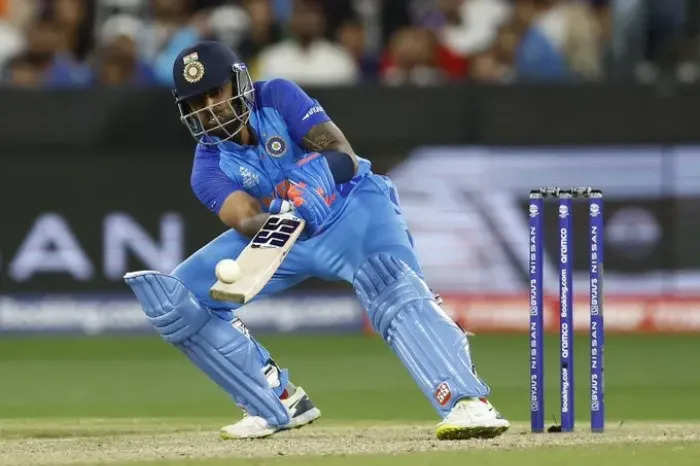 Rajkot was the venue where India and Sri Lanka played the final game of the 3rd and final T20 of the short series. Sri Lanka came to India to show their new found approach to cricket which won them the 2022 Asia Cup title. India on the other hand had to make sure that their proud home record  stays afloat after suffering a 16 run loss during the 2nd T20I at Pune.

India were 52/2 when Surya Kumar Yadav walked into bat. Rahul Tripathi had just walked back to the dugout after scoring 16 ball 35 in his 2nd match for India. Surya had scored an amazing half century in the previous game at Pune.The incident in question occurred in the 2nd ball of the 8th over.

Chamika Karunaratne was bowling his 2nd over and was taken for 14 runs of his 1st over. SKY had hit him for a 4 in his 1st ball. The 2nd ball saw SKY get a short ball as he went on to the backfoot and played his patented half pull half flick for a six. Skipper Pandya, sitting in the dugout could only look in amazement as the ball travelled far and wide for a six.

Surya Kumar Yadav was the man to watch during the 2022 season as he scored 1164 runs from 31 games. He had hit 2 centuries and 9 half centuries during that period with an average of 46.5 and a strike rate of nearly 188. On Saturday, Yadav scored his 3rd T20I ton for India and joined a select list. Rohit Sharma with 4 centuries and Colin Munro with 3 tons. SKY got to his 3rd ton in his 45th game and 43rd innings to make him the fastest to achieve this feat.

Indian Cricket fans were over the moon as they saw Surya Kumar Yadav play an amazing shot which took everyone by surprise. You can read all the tweets by fans below.

Great intent from Rahul Tripathi, didn't hold back after missing out in debut innings or due to fall of early wicket.

Rahul Tripathi has the skill set closest to Suryakumar Yadav in T20 & should be backed at #3 even if fails sometimes & SKY should continue batting at #4.#INDvSL

Surya is just Unreal and unstoppable in T-20I's.😬#SuryakumarYadav