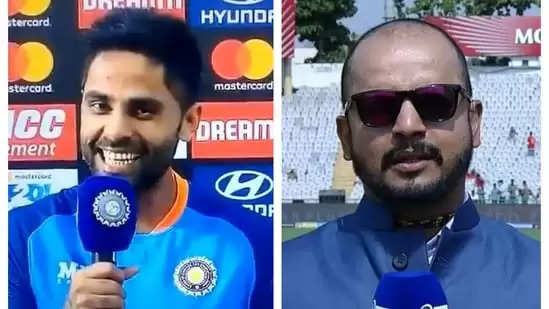 India and Australia came into do battle for the 2nd game of the short 3 match series at the VCA stadium at Nagpur. Australia, who are the defending world champs came into the game armed with a 1-0 lead in the series. the visitors had won the first game at Mohali, chasing 209 with 4 wickets in hand.

Nagpur and VCA stadium saw a huge crowd in anticipation for another cracking contest. The match though saw a huge delay, as the umpires weren’t happy with the wet outfield. The match finally began at 930 PM IST, with the game now 8 overs per side. India won the toss and chose to field, with Bumrah replacing Umesh Yadav and Pant coming in for Bhuvneshwar Kumar.

During his playing days, it was Murali Karthik who used to have the spin in tangle with his spin. On Friday, the former left arm spinner was left stumped for words by Surya Kumar Yadav. Karthik on the live broadcast via Star Sports India asked SKY “You are up against the world champions, you are 1-0 down, whats the story?”. SKY was quick to respond and say “1-1 tonight?” > Karthik was left stumped and all he could mutter was “Good stuff, that’s the spirit go well tonight”

Batting first, Axar Patel did the initial few damages with the ball as he got the key wicket of Maxwell for a 1st ball duck. Green was run out after a brilliant throw by Kohli caught him short. Tim David also fell for 2 bowled by Axar Patel. It was captain Aaron Finch with 31 off 15 and Wade with 43 off 20 that helped Australia reach 90 on the board.

Captain Rohit Sharma scored a thundering 20 ball 46 with 4 fours and 4 sixes, while he was given good support by Rahul with 10 and Kohli with 11. India needed 9 off the last over, which was bowled by Sams. Dinesh Karthik came out and swung the first ball for a six, and pulled the next for a 4 to help India win the game by 6 wickets with 4 balls to go.