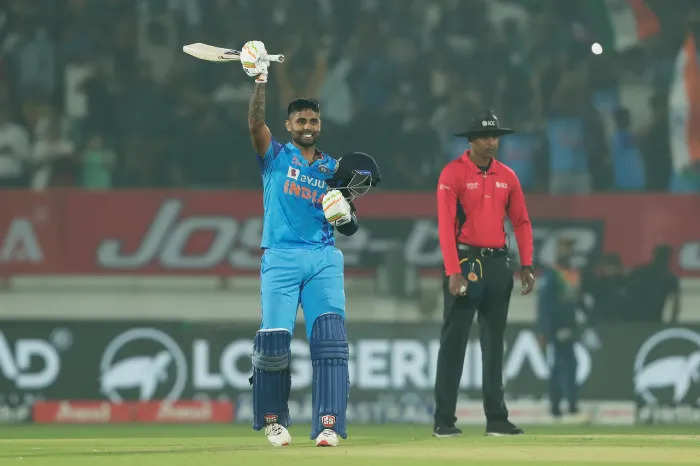 India and Sri Lanka played at Rajkot in what was the series decider for the 3 match T20I series. India won the 1st game in Mumbai by 2 runs, before Sri Lanka came back to win at Pune by 16 runs.

Sri Lanka were looking to end India’s run of wins in bilateral series streak in the T20 format. This was a huge test for Hardik Pandya and his men after their display during the Pune T20 on Thursday where they conceded over 200 runs with the ball.

India won the toss and elected to bat first, this was what the fans and experts wanted India to do at Pune. Both the team went in with the same team which meant, Ruturaj Gaikwad wasn’t given any game time. Arshdeep Singh too was persisted with despite his horror game at Pune.

It was an amazing 2022 for Surya Kumar Yadav with the bat in the T20 format. Yadav scored 2 centuries last year and the 32 year old began the year just the way he finished the last. Yadav displayed his full might with the bat as he scored his 3rd T20I ton for India.

Yadav scored 112 off 51 balls, reaching his century in just 45 balls. Yadav’s innings contained 7 fours and 9 sixes. The sixes were typical Yadav’s school of batting with scoops and flicks being employed to clear the ropes as it left the visiting bowlers helpless.

Rahul Tripathi starts the fight back –

India lost the wicket of Ishan Kishan for 2 when he was caught by Dhananjaya De Silva off Madushanka for 2. It was 49 run stand between Rahul Tripathi and Shubman Gill which got India back into the contest. Tripathi, scored 35 off 16 balls with 5 fours and 2 back to back sixes to give India the impetus. After hitting Karunaratne for 2 sixes, the Sri Lankan bowler had Tripathi caught at wide slip by Madushanka.

Gill and Yadav then added 11 runs in under 10 overs with the two batters leaving the Sri Lankans clueless. Gill on 46 gave Hasaranga the charge before he was beaten in the flight and was out for 46. Hardik Pandya and Deep Hooda both scored 4 before falling in a bid to score quick runs. Axar Patel fresh of his amazing knock at Pune scored 21 not out off 9 balls with 4 fours to help India reach 228.

Harsha Bhogle led the charge when he came out to congratulate Surya Kumar Yadav for his amazing knock. You can read all the tweets by fans below.

I mean it's not everyone's cup of tea 😭♥️ #SuryakumarYadav pic.twitter.com/GGmBjmxuSi

I mean it's not everyone's cup of tea 😭♥️ #SuryakumarYadav pic.twitter.com/GGmBjmxuSi

Not many people have batted as well as this in their dreams. #SuryakumarYadav

Not many people have batted as well as this in their dreams. #SuryakumarYadav