Watch! Suryakumar Yadav falls after getting another start to anger the Indian fans on Twitter 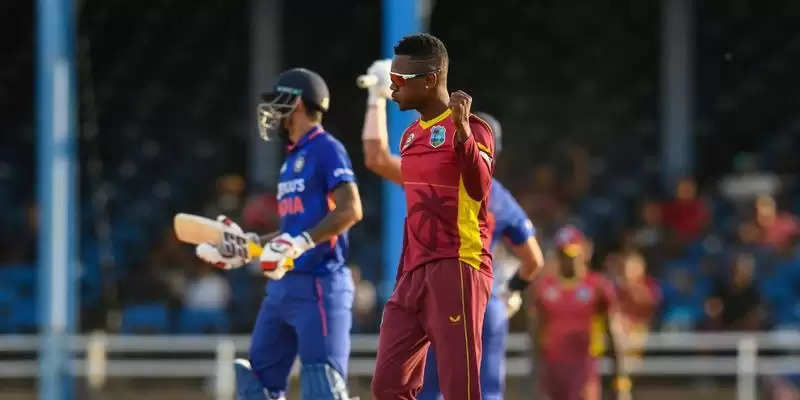 It was a bright and sunny day at the Brian Lara Stadium at Trinidad and Tobago as India and West Indies locked horns in the first T20 on Friday. West Indies won the toss and chose to bowl first as India welcomed back some of the big names. Rohit Sharma was back in the helm as the captain, while Pant, Hardik Pandyaq, Ashwin and Karthik made their returns along with Bhuvnehwar Kumar. Arshdeep Singh who has been warming the benches so far was given a place in the XI along with Ravi Bishnoi.

India who had seen Rohi Sharma and Rishabh Pant open the batting during the 3 game T20 series against England recently, sprung a huge surprise with Rohit Sharma coming out to bat with Surya Kumar Yadav. It was the first time since 2018 IPL that SKY was opening the innings in T20 cricket. Kumar scored an amazing 117 in India's last T20 against England. Over the last few games, SKY has been getting starts but hasnt been able to capitalize on it. On Friday, SKY was off the blocks with a boundary off McCoy in the first over and followed it with another four the next over off Jason Holder.

Nicolas Pooran introduced AKeal Hossein in the 3rd over of the game, with the pitch offering some turn and bounce. The first ball of the over, SKY tried to clear the cover fielder but Kyle Mayers dropped an easy chance. The next ball, Hossein got one to turn and bounce and it took a leading edge of SKY's bat only to fall safe between two fielders. The introduction of Joseph saw SKY welcome him with a six , followed by 4 byes and ended with a four this time off the edge of the bat to give SKY another life.

Luck runs out for SKY -

The 4th ball of the fifth over which was bowled by Hossein saw SKY try to hit him over the mid-wicket only to fall when he was caught by Holder for 24. SKY scored 24 off 16 balls with 3 fours and a six. It was a massive moment for the home team as the Indian had gotten off to yet another good start with the bat.

The brief stay for SKY and the charmed life he lived did not please the Indian fans as they took to twitter to have their say. You Can read all the tweets below.

What a shot by Suryakumar Yadav - incredible batting. The game is live and exclusive on @FanCode, watch it. #Ad #IndvWI. pic.twitter.com/fw6U3RMlyH