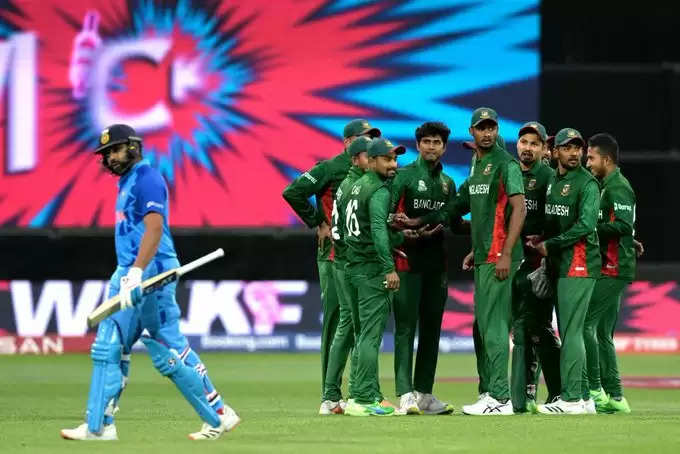 Bangladesh cricket team are in a period of transition as they have lost their 2 big stars in Tamim Iqbal and Mushfiqur Rahim. Coming into the 2022 T20 Cricket World Cup the hopes of Bangladeshi fans were as optimistic and as vibrant as ever. Before the game against India, it was clear that Shakib Al Hasan and his boys needed a win to be in contention for a place in the semi finals.

Bangladeshi fast bowler, Taskin Ahmed has been the sole bright spot for Bangladesh with the ball. On Wednesday, he bowled 4 overs and gave away just 15 runs without picking a wicket. It could all have been different if Hasan Mahmud had held on to a chance early in the game.
Taskin Ahmed loses his cool –

Rohit Sharma played one of his patented pull shots off Taskin Ahmed as the ball made its way to the square boundary. Hasan Mahmud settled under it and looked like he was about to take a simple catch. The young bowler dropped the catch and gave Rohit Sharma a huge lease of life. Taskin wasn’t pleased one bit as he was seen losing his temper and abusing Hasan Mahmud as he made his way back to his bowling run-up.

Rohit Sharma did not trouble the scorers much as he fell for 2 with Hasan Mahmud getting his wicket. The young Hasan Mahmud picked 3 wickets but gave away 47 runs from his 4 overs.

Shoriful Islam too was picked apart as he was smashed for 57 runs from his 4 overs without picking a wicket. Shakib Al Hasan and Mustafizur Rahman bowled 4 overs each and went wicketless while conceding a total of 64 runs amongst them. The bowler of the day was without a doubt Taskin Ahmed who was making life difficult for the Indian batters.

No ball issues for Bangladeshi bowlers –

If the catch dropped wasn’t the only calamity, Bangladesh 3 No- Balls with 2 coming from Shoriful and one from Hasan Mahmud. Bangladesh have bowled the highest number of no balls by a team during the ICC 2022 T20 World Cup.

The catch dropped by Hasan Mahmud and Taskin Ahmed losing his cool and abusing the youngster bought out the cricket fans who took to Twitter to air their views on the same.

#RohitSharma after the catch drop I thought it's going to be 100 for him today.

That Rohit Sharma’s drop catch made me equally frustrated like when our fielders drop catches which Rauf creates. Impressive start by Bangladesh.

First drop the Catch then pick the Wicket in his own bowling.
What a comeback by Young Hasan Mahmood ♥️. Poor form of Rohit Sharma still continues.#INDvBAN #T20WorldCup pic.twitter.com/vsqpyxNxZN