Watch! Tristan Stubbs lights up the day for South Africa with a brilliant knock 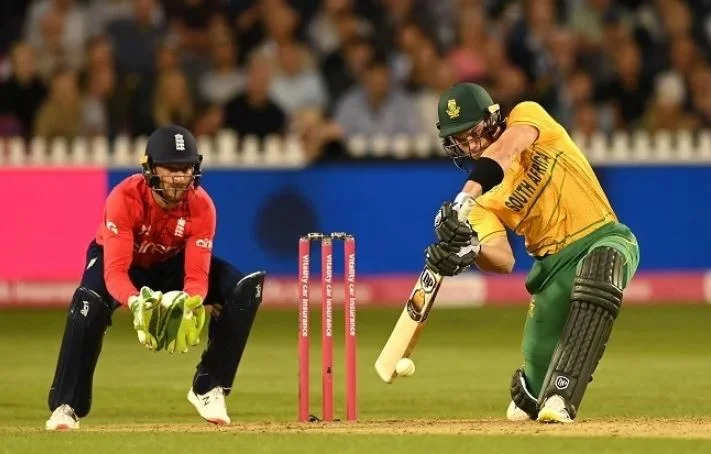 Both South Africa and Mumbai Indians fans and team management must be a happy bunch on Wednesday night. The two teams have a potential gem in their hands in the youngster Tristan Stubbs. While South Africa lost the 1st T20 against England, the fight they put up was amazing and it all came down to the brilliant knock played by Stubbs who had the commentators and the crowd at Bristol in awe with the kind of power hitting he showed.

Stubbs comes to the fore –

Coming into bat with the fall of Reeza Hendricks who scored 57 and the score reading 86 for 4. The South Africans needed nearly 150 runs from the next 10 overs to win the game. Stubbs came into bat and was aggressive right from the word go. The youngster scored an amazing 28 ball 72 with 2 fours and 8 massive sixes to give the visiting side some semblance of hope. Stubbs and Miller added 50 runs in quick time, with Stubbs doing most of the scoring as Miller who is the skipper of the side could score just 8 runs off 12 balls with the bat.

After having scored a massive 234 on the board, the English bowlers did not let the intensity dry as they pegged the visitors back at regular intervals. Topley and Gleeson picked 2 and 3 wickets each, while Rashid Picked 2 and Moeen Ali the wicket of dangerous looking Hendricks. Gleeson got the key wicket of Stubbs just when it looked like the young South African could do more damage and may be pull of a magical win. In the end it was England who came out on top with a 41 run win to take a 1-0 lead in the series.

Stubbs came in as a replacement player for Mills during the 2022 season of TATA IPL and next year he will be looked at as a key player if Mumbai decided to stick with him along with Brevis and Tim David. One thing is for sure, South African cricket is in safe hands with talents like Stubbs coming to the fore.