Watch! Tristan Stubbs pulls of a magnificent catch to get rid of Moeen Ali 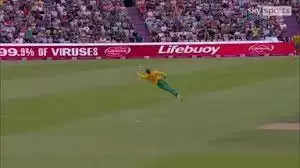 South Africa and England are facing off in the 3rdT20 at the Rose Bowl at Southampton. The Series is locked at 1-1 with England winning the first game and South Africa coming back to win the second game. England are under the new regime of Jos Buttler and they had lost their last T20 series against India. England began the series with a huge win at Bristol, while the South Africans came back to level series next game at Cardiff.

England were tasked with a chase of 192 to win the game and take the series after South Africa had posted a massive 191 on the board. The incident in question happened in the last ball of the tenth over. Markram was bowling to Moeen Ali and he got the ball to turn and bounce. Ali got a leading edge and Stubbs made a run backwards and dove to take the catch and dismiss Ali for 3. It was one of the best catches we have seen in a while as the South Africans swarmed to the youngster to show their appreciation.

And he takes blinders 😱

South Africa batted first and lost Quinton De Kock out for a duck off the third ball of the game bowled by Willey. Reeza Hendricks who has scored two half centuries made it a third fifty in a row along with Markram who scored 51. Hendricks ended up with 70 runs off 50 balls with 9 fours and Markram scored 51 runs from 36 balls. They were supported well by Russow who scored 31 off 18 balls and captain Miller who scored 22 off 9 balls