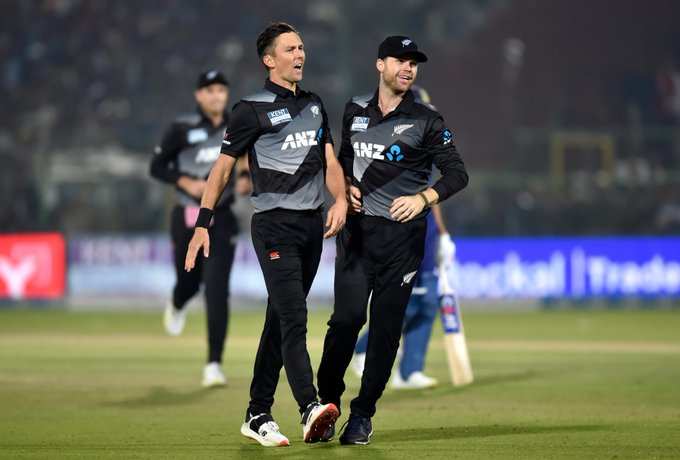 It was stuff of dreams for a Pakistani cricketer and fan as they beat New Zealand at SCG. The 7 wicket win ensured that Pakistan made it to the final of the 2022 T20 World Cup. Men in green showed good discipline with the bat and ball as they overcame a shabby New Zealand to become the first team to reach the finals.

Pakistan’s entry into the final is their first time for 13 years. The last they reached the final they went on to beat Sri Lanka in the final to win the title in 2009. Babar Azam, and his men will now await the result of the 2nd semi final between India and England for the big game on Sunday at the Melbourne Cricket Ground.

Pakistan were tasked with a chase of 152 on a SCG pitch which was looking conducive for batting. This was after the Kiwis captain, Kane Williamson won the toss and chose to bat first. Babar Azam and Mohammad Rizwan gave the Pakistanis a great start by adding over 100 for the 1st wicket stand.

The incident took place with Trent Boult, bowling his final ball of his spell and the last ball of the 17th over. The left arm seamer bowled a full toss as Rizwan smashed it towards the boundary.

Lockie Ferguson kept his cool and took a tumbling catch, as Rizwan was seen gesticulating towards the umpire for a no ball. While the debate was still going on, Rizwan was spotted short of his crease. Ferguson threw the ball towards Boult who effect a run out. The 3rd umpire though deemed the ball fair and Rizwan was given out caught for 57 off 43 balls with 5 fours to his credit.

Pakistani opners give a solid start –

New Zealand, batting 1st scored 152 on the board which looked under the par score. Daryl Mitchell with 43 and Williamson with 42 were the top scorers for the Kiwis. Afridi picked 2 wickets, while Nawaz got one wicket for the Pakistanis.

Babar Azam who had scored 39 runs in the whole tournament was backed to do good by batting coach Matthew Hayden. The Pakistani skipper showed the trust placed on him wasn’t misplaced as he scored 53 off 42 balls with 7 fours. Azam was given a life in the very 1st ball he faced and he made the kiwis pay for it.

Mohammad Haris scored 30 off 26 balls with 2 fours and a six, with one four and the sole of the Pakistani innings coming off Ferguson to make it 8 needed off 12 balls. The winning hit came when Shan Masood drove Southee straight down the ground to see massive celebrations in the Pakistani dugout.

Cricket fans took to Twitter to have their say on the genius shown by Boult on Twitter. You can read all the tweets by fans below.

Time for Rizwan-Babar haters to go back to their nut shells. #T20WorldCup

Player of the match should be given to Rizwan#T20WorldCup