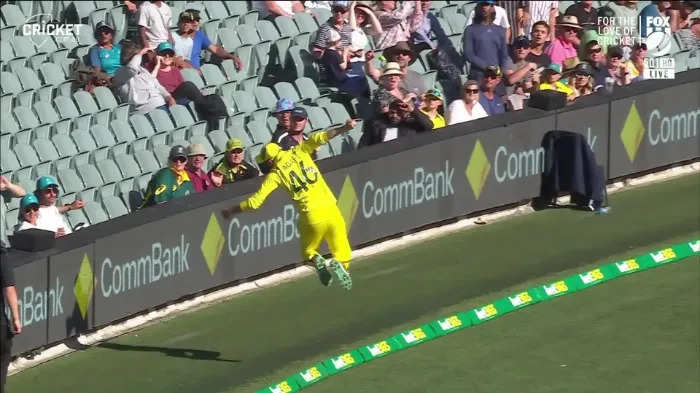 Australian cricket team began their home season with a fantastic performance against England. The 2021 T20 World Champions beat the 2022 World T20 Champions by 6 wickets in the first ODI at Adelaide on Thursday.

Australia took a 1-0 lead in the 3 match ODI series after beating England by 6 wickets. The Australians under new ODI skipper Pat Cummins were at their best not only with the bat and ball, but also on the field.

Australian summer of cricketer which took a pause owing to the ICC 2022 T20 World Cup saw resumption of action. England and Australia began the short 3 match ODI series with the 1st game at Adelaide. It was Pat Cummins who won the toss and chose to bowl first on a beautiful day at Adelaide Oval.

Ashton Agar’s amazing effort to save a six –

Ashton Agar had an exceptional day out on the field on Thursday as the left are spinner pulled off some gravity defying save. The incident happened in the last ball of the 45th over. Malan batting on 131, pulled a ball off Australian captain Pat Cummins towards the leg side boundary.

The ball seemed destined to go for a six, but Agar jumped at the right time and pawed the ball back into the field. The sparse crowd at Adelaide gave the 29 year old a huge ovation for his effort to save a certain six runs.

Agar turns Ricky Ponting and effects a brilliant run out –

Earlier in the day, Liam Dawson was batting on 11 when he played the ball to point. Ashton Agar was stationed at point and he made his way to the ball in a instant and picked it in his left hand and threw the ball in one swift motion to hit the stumps all in one go.

Liam Dawson did not even try to make his way to crease as the ball had hit the stumps much before the batter could get to the bowlers end. Dawson cut a sorry figure as he walked back to the hut disappointed for 11.

Twitter reacts to Agar’s day out on the field –

Cricket fans took to twitter to have their say on Ashton Agar and his fielding efforts and compared him to great Australian skipper Ricky Ponting for his acrobatics. You can read all the tweets below.

Your tweet was quoted in an article by Sportscafe https://t.co/D0slXPOXwZ

Your tweet was quoted in an article by Sportscafe https://t.co/D0slXQ6yVz