Watch! Twitter reacts as Tom Latham does an “MSD” to dismiss Babar Azam 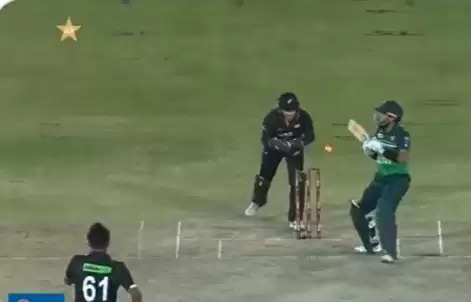 Pakistan and New Zealand are in the middle of a 3 match ODI series, with all the 3 ODI games being played at the National Stadium at Karachi. Pakistan had won the first game on Monday by 6 wickets. This win gave the home team the lead in the series before New Zealand came to level it on Wednesday. New Zealand won the game by 79 runs to make the final game on Friday an interesting one.

Chasing 262 to win, Babar Azam was putting the lone fight against a relentless Kiwi attack. The Pakistani skipper was batting on 79 off 113 balls when he was trying to do the impossible all by himself. Azam was batting with Naseem Shah with Haris Rauf yet to come.

New Zealand knew till Azam was in the middle, the Pakistanis will fancy themselves. That’s when Williamson got Ish Sodhi back into the attack and that paid off. Bowling the 43rd over, Ish Sodhi bowled one wide outside off stump as Azam went for a reverse sweep. The Pakistan skipper missed the ball and Tom Latham waited for a fraction of a second before whipping off the bails.

The on field umpire went upstairs to have a look at the possible stumping. Azam was in his crease for majority of the time, but he lifted his backfoot for a second, that’s where Latham swooped in and whipped off the bails. The quick thinking stumping had the Kiwis happy as they got rid of Babar Azam and had all but sealed the game. The bowlers and fielders came charging in to congratulate Tom Latham for his quick thinking.

Having set a target of 262 to win, Tim Southee got the wicket of Fakhar Zaman for a duck. At 9/2 with Imam Ul Haq out for 6, Mohammad Rizwan joined Babar Azam and the pair added 55 runs for the 3rd wicket. Rizwan scored 28 before he was bowled by Santner. Agha Salman with 25 tried to build a partnership with Azam before he was dismissed. Southee and Sodhi picked 2 wickets, while rest of the Kiwi bowlers picked a wicket each.

Cricket fans were quick to draw similarity to wicket of Shabbir Rahman when he was stumped by MS Dhoni in the same way during the 2016 T20 World Cup. You can read all the tweets by fans below.

Today was probably worst inns of #BabarAzam𓃵 and fans truly have right to criticize. Barring Indians trolls who have been insulting

New Zealand defeated Pakistan in ODI and leveled the series 1-1. Openers quickly returned to the pavilion, after which wickets continued to fall one after the other. Babar Azam also lost his courage after making 79. Very disappointed from Pakistan. We'll played NZ.#PAKvNZ