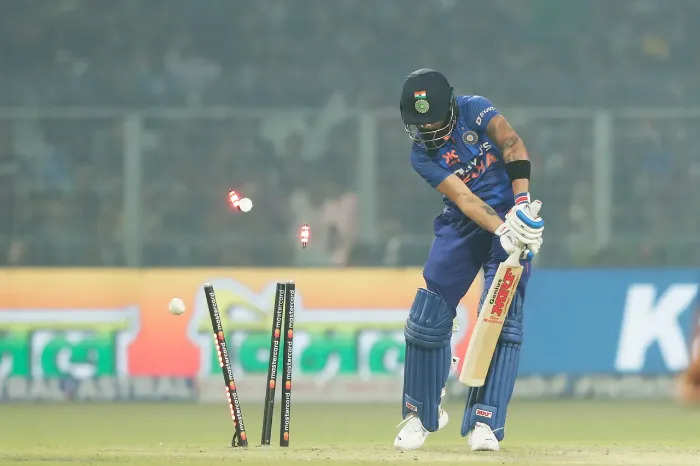 India and Sri Lanka are witnessing a special game at the Eden Gardens in Kolkata. After the run fest at Guwahati where over 680 runs were scored, the bowlers back in the game at Kolkata. Sri Lanka were bowled out for 215 after being 102/1 at one stage thanks to Kuldeep Yadav and Mohammad Siraj. The eyes of the fans were on the big 2 of the Indian batting in Rohit Sharma and Virat Kohli who had batted well in their 1st ODI on Tuesday.

Virat Kohli fails to get going –

Rohit Sharma and Gill had given India a good start with 33 runs for the 1st wicket in just 5 overs. Kohli walked into bat at the fall of Rohit caught behind for 17. The crowd expected the 34 year old to continue from where he left off when he scored 113 during the 1st ODI. Lahiru Kumara was the impressive Sri Lankan bowlers bowling with pace. Kumara got one to come back in as he breached the defense of Kohli for 4 to leave the former India captain stunned.

Siraj and Kuldeep combine to bowl out Sri Lanka for 215-

3/51 by Kuldeep Yadav and 3/30 by Mohammad Siraj broke the back of the Sri Lankan batting. At 102/1 the visitors hoped to score above 300 to put India under pressure. Kuldeep then got the wickets of Kusal Mendis, before getting Shanaka and Asalanka in quick time.

Siraj got the wicket of Avishka Fernando before dismissing Wellalage for 32 and Kumar for a duck. Debutant Nuwanidu Fernando top scored with 50 as Sri Lanka were bowled out for 215 in the 40th over.

Rohit Sharma began the innings with 2 fours and a huge six before falling to Chamika Karunaratne. Shubman Gill played some crisp shots before falling to Kumara for 21. KKR skipper Shreyas Iyer scored 28 off 33 balls with 5 fours before he was out LBW to Rajitha. India were struggling at 86/4 before Pandya and Rahul added 75 for the 5th wicket. Pandya was out for 36 caught behind off Chamika Karunaratne.

Twitter reacts -
Indian cricket fans took to Twitter as they had their say on the wicket of Virat Kohli. You can read all the tweets by the cricket fans below.

Some fans from India criticised Babar Azam's batting for a low strike rate on a hard Pitch. Babar strike rate was 69.3, and Virat's was 44.4. But at least they stood there until the end trying to win it whereas Virat Kohli can’t even save wicket. #INDvSL #INDvsSL #PAKvNZ #PakvsNZ pic.twitter.com/uXzOoNaE1g

Those who were criticising Babar Azam for SR of 69 yesterday and those who are doing the same tonight for Virat Kohli's SR of 44 are both wrong. This can happen to anyone, especially in tricky chases of 210-260. India have batters to still win from here, Babar was alone. #INDvSL