Watch! Twitter reacts to Rohit Sharma in tears after India gets knocked out of the World Cup 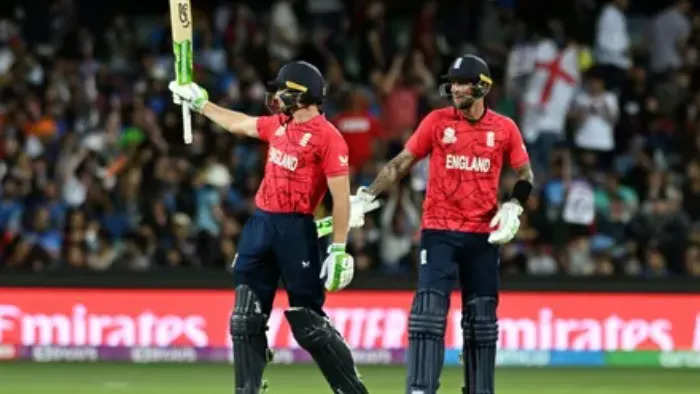 India on Thursday had to face the humiliation of seeing England hammer them by ten wickets. The ten wicket loss was in the semi finals of the T20 World Cup 2022. This has now set up a repeat of the 1992 Cricket World Cup final between England and Pakistan.

The Indian team were outsmarted in all departments of the game by a highly motivated and focused England team. Jos Buttler and side won the game with 4 overs to spare as the Indian bowlers had no place to hide on the luscious green Adelaide Oval.

Indian skipper Rohit Sharma was a crushed man as he was sitting in the dugout. The 35 year old was seen in tears after the comprehensive loss on Thursday. Indian coach, Rahul Dravid walked up to Rohit and consoled him.

The cameras panned to Rohit who was sitting pensive and was clearing the tears from his eyes. The pain and the grimace was there to see as Rahul Dravid made his way and sat by Rohit after giving a few pats.

India were put into bat by Buttler after the English captain won the toss. India lost their opener KL Rahul for 5 caught behind by Buttler off Woakes. Rohit was joined by Kohli as the pair added 47 for the 2nd wicket.

Rohit Sharma was struggling for form and timing and hit 4 fours in his 27. The Indian captain in the quest for quick runs was caught by Sam Curran off Chris Jordan to leave India at 56/2 in the 9th over.

Surya Kumar Yadav hit one six and a four in his 14 before he went for an inside out shot to be caught by Salt off Adil Rashid. At this stage were 75/3 with runs hard to come by. India reach its 100 in the 15th over.

It was then Kohli and Pandya who took the bull by its horns and went after the English bowling. Kohli scored 40 ball 50 as he went past 4000 T20 I runs for India. This was his 4th half century this tournament and 37th overall.

Pandya on the other hand scored 63 runs off 33 balls with 4 fours and 5 sixes as he helped the Indian team score 68 runs in the last 30 balls to reach 168 on the board.

Some big names took to Twitter to have their say on the Indian team’s loss and you can read all the tweets below.

170/0
A figure thats going to disturb for times to come. Tough game India.