Watch! Twitter reacts to Ryan Burl take a blinder off a catch to dismiss Rishabh Pant 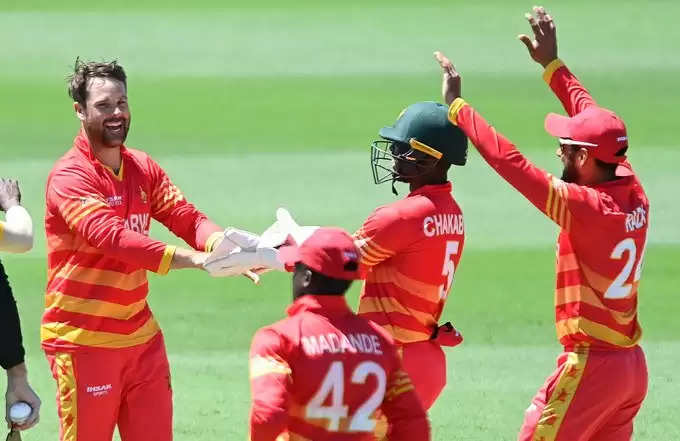 India and Zimbabwe met in a ICC event after over 7 years and the venue was the iconic MCG. The final game of the Super 12 stage had nothing in it apart from vested interest for India. Win over Zimbabwe would put India at the top of the table and allow them to play against England on 10th November at the Adelaide Oval.

The other semi final will pit New Zealand against Pakistan in the 1st Semi finals on Wednesday at the Sydney Cricket Ground. Pakistan had occupied the top spot after their rather lucky come from behind spot in the semi finals.

India won the toss and chose to bat first as the Indian fans thronged the stadium to watch their favorite stars. Rishabh Pant was given a start as Dinesh Karthik was rested for the game. The rest of the team was the same as India wanted to head into the Semi Finals with each player with form under their belt.

Rishabh Pant fails to get going –

It wasn’t any different on Sunday when Sean Williams looped the ball outside off stump to Pant. The left hander went for a slog sweep as Ryan Burl covered huge ground to be take a brilliant diving catch. This sent the Indian fans into a state of shock while the partisan Zimbabwe fans were cheering with joy.

India to face England in the Semi finals –

The Indian team walked away from MCG with a 71 run win to finish at the top of Group 2 with 8 points. India will now face England on Thursday as Rohit Sharma and Jos Buttler fight to make it to the finals. The Indian team will be playing the game at Adelaide oval against an in-form and confident England side who won against Sri Lanka to knock Australia out of the tournament.

The catch taken by Ryan Burl left the fans speechless as they took to Twitter to have their say and you can read all the tweets below.

That catch by Ryan Burl. Wow! Happened right underneath us. He covered a lot of ground. These big boundaries just change the dynamics of T20 cricket

Can't blame Pant for that dismissal, it was a fielders wicket. What a Catch that was Ryan Burl 👏

Wasn't in favour of Pant's inclusion anyway because him & DK don't compete for the same spot in the batting order, but one can't really fault him for that dismissal. Ryan Burl made that into a wicket out of nothing.

That flying catch by Ryan Burl of Rishabh was extraordinary. That was a perfect placement for a boundary which burl converted into a lovely catch. ❤ #INDvsZIM #T20worldcup22

This was good match for experiment which is failed successfully

Wasn't in favour of Pant's inclusion anyway because him & DK don't compete for the same spot in the batting order, but one can't really fault him for that dismissal. Ryan Burl made that into a wicket out of nothing.

2mins silence for who asked Pant in the place of DK.. things are not so easy as we assume. #INDvsZIM

@ryanburl3 has absolutely bodied @bhogleharsha and @CRBrathwaite26 who were making fun of how he caught Virat Kohli. It happened even before that discussion ends. #T20WorldCup #INDvsZIM #MCG