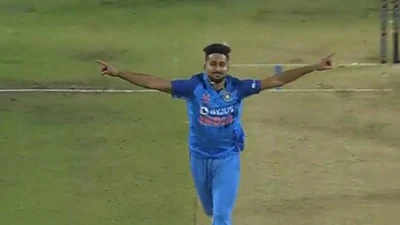 Fast bowling is a rare art and any bowler who can bowl over 145KPH is a rarity. Umran Malik is perhaps the world’s fastest bowler and India have a rare gem on their hands. On Tuesday, the 23 year old became the fastest Indian bowler when he bowled a ball at 155 KPH during the 1st T20I at Mumbai. On Thursday, at the MCA stadium in Pune, Umran Malik further showcased his rare and exciting talents during the 2nd T20 vs Sri Lanka.

India won the toss and chose to bowl and as it turned out had to regret the decision. India made two changes with Arshdeep coming in for Harshal Patel, while Rahul Tripathi made his debut. Tripathi, the local boy came in for Sanju Samson who got injured during the 1st game.

Like Arshdeep and Shivam Mavi, even Umran Malik got a tap in his first over of the day. Malik got his 1st wicket when he bowled Rajapaksa and beat him for pace with a ball clocking 147 KPH. Malik then got rid of Asalanka who was looking dangerous on 37 off 19 balls with 4 sixes caught by Shubman Gill. The moment of day came the very next ball, when Hasaranga saw his off stump lay flat on the ground even before he could get his bat down.

Sri Lankan skipper, Dasun Shanaka wrote himself in history books when he scored the fastest T20 fifty by a Sri Lankan. Shanaka scored 56 off 22 balls with 2 fours and 6 sixes. He beat the records of Mahela Jayawardene and Kumar Sangakkara to score his half century in just 50 balls.

Chasing 207 to win at Pune wasn’t going to be easy, and India found this the hard way. India were 57/5 at one stage with Kasun Rajitha picking the wickets of Ishan Kishan and Shubman Gill  in his first over. Tripathi was caught behind off Madhushanka, while Hardik Pandya fell to Karunaratne for 12. Hasaranga got into the act to get rid of Deepak Hooda who was out for 9. Despite a late assault by India, the visitors kept their calm and won the match by 16 runs.

India needs to keep him fit and fine for a long long time.

Finally India got a real pace bowler after so many years