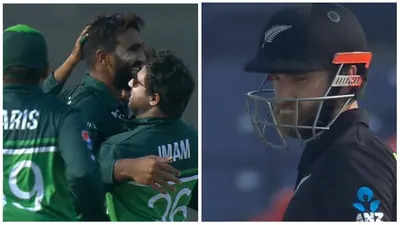 Pakistan’s home season for cricket has now turned its sight to the white ball cricket. After a dull 0-0 draw in the two match test series, the first ODI was played on Monday. Just like the test matches, all the games of the ODI series will be played at the National Stadium in Karachi. It is an important series for both the sides with the huge ICC Cricket World Cup slated to be held later this year in India.

Pakistan won the toss and chose to bowl first considering the dew expected later in the day. New Zealand and Pakistan both had debutants in their line up playing the 1st ODI. Henry Shipley the 26 year old right arm medium pacer. Pakistan gave a debut to Usama Mir the 27 year old right arm leg spinner.

Mir castles the Kiwi skipper and leaves him stunned –

New Zealand skipper Kane Williamson was batting well after his double ton exploits during the test series. New Zealand were 69/2 in the 15th over when Usama Mir bowled on the leg stump. The ball turned enough to hit the top of the off stump to send back the Kiwi skipper to the dugout for 26. Williamson for his part was jus stunned and could look in disbelief at the nature of dismissal.

Who is Usama Mir –

Born on 23rd December, 1995, Usama Mir is a right arm leg spinner. He has come in place of the injured Shadab Khan. Mir has played the CPL for St Kitts and Nevis Patriots, while he plays for Karachi Kings in the PSL. Mir has played 17 first class picking 28 wickets. In List A cricket he has picked 63 wickets with a best of 5/23 from 40 games. Mir has also played 66 T20 games picking 54 wickets with an economy of 7.7 runs per over.

Naseem Shah got the 1st wicket in the very first over when he castled Devon Conway for a duck. Finn Allen then scored 29 off 27 balls with 6 fours before falling to Mohammad Wasim Jr caught by Agha Salman. Post the fall of Williamson, there was a 56 run stand between Daryll Mitchell and Tom Latham.

The stand was broken when Mitchell was out for 36 bowled by Mohammad Nawaz, while Latham fell for 42 to give Mir his 2nd wicket of the day. Glenn Phillips scored an impressive 37, while the top scorer of the day was Michael Bracewell with 43.

Young Pakistani pacer, Naseem Shah was the wrecker in chief when he picked his 2nd five wicket haul in ODI cricket. Shah finished with figures of 5/57 from his ten overs as New Zealand finished at a decent 255/9 from their 50 overs with Southee scoring 15 not out and Santner scoring 21.