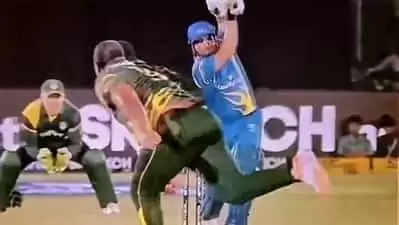 It was a nostalgic day for the Indian cricket fans on Saturday the 10th of September. It was a day that they got to see their childhood heroes take to the field once again. Sachin Tendulkar was the man of the moment as he was leading the Indian legends once again. The Road Safety World Series 2022 got off to a grand start as India Legends took on South Africa legends.

Aged 49, even now Tendulkar has the aura that he had during the height of his playing career. 9 years since his retirement from the game, the best batsman of all time still makes the crowd go crazy. The Green Park Stadium at Kanpur is no exception as Tendulkar took to the field with the bat in hand. There was a huge cheer when it came to light that South Africa had won the toss and chosen to field.

Tendulkar brings the nostalgia with his stroke play –

Sachin Tendulkar came out to open with Naman Ojha, as Virender Sehwag will be busy in the legends league of cricket. The master blaster started off slow and showed off his rust with the bat. Once he was in he played two magnificent over the top shots for fours. A twitter user by the name Gopal Jivani put up a short clip of the master and said “Moment hai vai moment hai, 1996 vibe wali”. While another user said he had goosebumps while watching Sachin bat.

Raina shows his class with the bat –

Batting first, despite the two amazing shots over the top, Sachin Tendulkar tried to do the same the 3rd time. The charm did not last as he was out for 16, Naman Ojha followed him soon for 21. In walked local hero Raina, who had just retired from all forms of the game. The left hander added 64 runs for the 3rd wicket with Binny and scored 33 off 22 balls with 4 fours and a six.

A target of 218 was never going to be easy for the South African legends as the Indian bowlers were up to the mark. Captain Jonty Rhodes was the top scorer with 38 off 27 balls while, Morne Van Wyk with 26 and Puttick with 23 were the other highlights in the SA batting. Rahul Sharma was the leading wicket taker with 3/17 as Munaf Patel and Pragyan Ojha picked 2 wickets each. Irfan Pathan and Yuvraj Singh picked 1 wicket each.