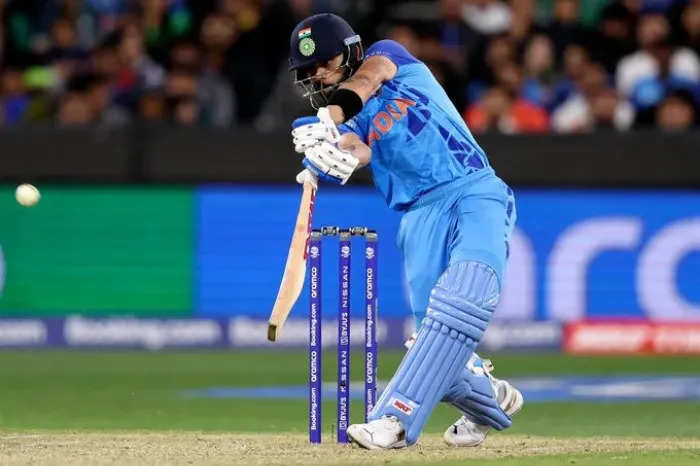 Indian batting came to the fore as the men in blue took on Sri Lanka during the 1st ODI. The ground at Barsapara Stadium at Guwahati saw high run scoring as the Indian batter ran riot against the Sri Lankan bowling. Some misfields and few dropped catches helped India reach a massive 373/7 from their 50 overs, to put the visitors batters under pressure.

Former India skipper Virat Kohli and Hardik Pandya are two of the swiftest runners between the wickets. The incident happened in the 43rd over of the Indian innings. Virat Kohli was facing Kasun Rajitha when he played the ball to square leg.

Kohli was quick to get off the blocks and was looking for a 2nd run only Pandya to send him back and turn down the second. Kohli who had already made half way down the pitch wasn’t too pleased with Pandya and stared at the 29-year-old all-rounder.

It was a memorable day for Virat Kohli as he scored his 73rd international ton for India. it was the 45th ODI century for Kohli as he moved within 4 centuries of the 49 ODI tons scored by Sachin Tendulkar. It was a sublime innings, as Kohli scored 113 off 87 balls with 12 fours and a six during his knock. During his innings he also went past 14,000 runs in List A cricket.

Earlier in the day, Gill with 70 and Rohit Sharma with 83 gave India a fine start. Shreyas Iyer was out for 28  before KL Rahul and Virat Kohli added 90 runs for the 4th wicket. Rahul was out for 39 as Kohli kept the run scoring going. For Sri Lanka, it was Kasun Rajitha who picked 3/88 from his 10 overs as India managed to score 373/7 from their 50 overs.

Indian cricket fans took to Twitter to have their say on the mid pitch misunderstanding and you can read all the tweets below.

This glare from Virat Kohli to Hardik Pandya though 👀 pic.twitter.com/kr1D2xeJpP

I like the confidence of Hardik but sometimes He goes over the board. You can't deny an easy double for your partner. What's the point of having that level of fitness? Maybe Kohli or someone needs to have a word with him.

Hardik Pandya turning down Virat
Kohli like that, was sheer arrogance.
.
.
.
Period.#INDvSL #INDvsSL

Now I have seen everything!