Watch! Virat Kohli have fun with the crowd on Sunday during the 3rd T20 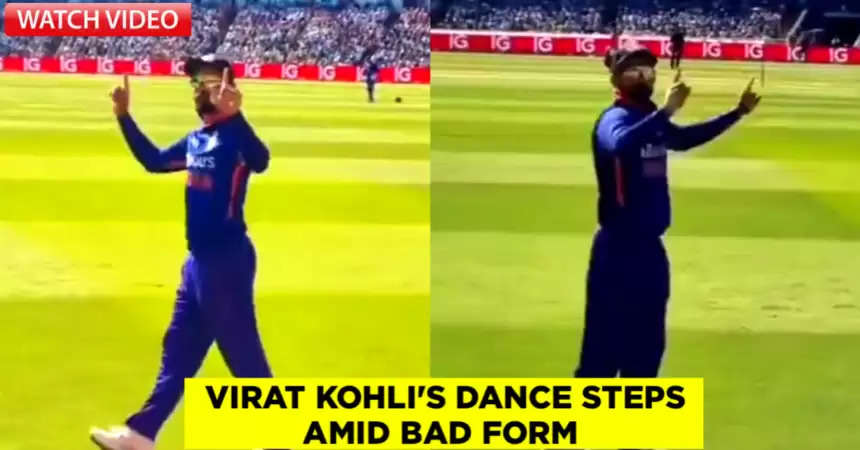 It was a memorable day of cricket at the Trent Bridge ground at Nottingham on Sunday. Over 400 runs were scored during the game which saw some amazing stroke play from both sides. While Dawid Malan top scored for England, for India it was Surya Kumar Yadav who stole the limelight with a brutal 117. The innings from SKY wasn’t enough as India lost the game by 17 runs but went onto win the series with a 2-1 margin after winning the first 2 games of the series.

Kohli’s fun moments with the crowd –

Virat Kohli hasn’t had a great time with the bat so far during this tour of England. In the rescheduled test he scored a mere 31 runs and 12 runs in the 2 T20 games. on Saturday he was out for 1, while on Sunday he hit a four and a six before falling for 11. That hasn’t taken away the fact that he still is a mass entertainer and a super hit amongst the fans and the crowds. Kohli was seen dancing and having a good time at the boundary rope near the fans.

Before the start of the T20 series, there were reports coming from the corridors of BCCI that time is ticking for Kohli. The sources said it was perform or perish kind of situation for the former Indian skipper. according to the same source, Kohli had to perform in these 2 games and the 3 ODI’s to be picked in the shortest format again. Coupled with the fact that Deepak Hooda has done well at number 3 for India in the chances give, Kohli is under pressure. Kohli has stated his desire to win the Asia Cup and the World T20 on quiet a few occasions.

Kohli will now be seen in the Indian team on Tuesday when they take on England in the first ODI. It has been quiet a while since the Indian team played ODI cricket, and the turn around time is also small. The fans will hope they can see Kohli shrug of this form and bring up that 71st century on Tuesday.