Watch! Virat Kohli hits the nets before the warm-up game against Leicestershire 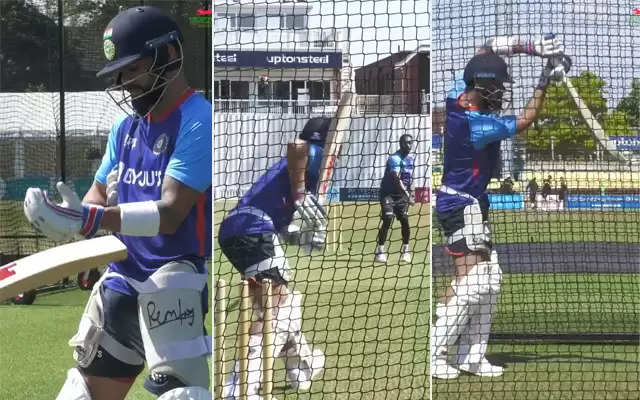 Test cricket is nearly upon us as the Indian team gets ready to face off against Leicestershire in the 4-day warm up game. The match is to begin on Thursday and this will be the sole game ahead of the rescheduled 5th test starting on 1st July. The Indian team will use this game as a chance to get into the red ball groove after months of white ball cricket, with IPL and T20 cricket dominating the scene. The match will also be special as it marks the return of Rohit Sharma and Virat Kohli after a break post the IPL.

Virat Kohli hasn’t had the best of times with the bat, and the IPL was perhaps his lowest point. Kohli scored just over 300 runs with 2 half centuries, but more importantly he scored 3 first ball ducks. The official twitter handle of Leicestershire posted a video where Virat Kohli was hitting the nets. The county side wrote “ A master at work you can watch @imVkohli and BCCI’s other test superstars tomorrow at the uptonsteel county ground”. The match will be telecasted Live on YouTube in the official channel of Leicestershire channel.

A master at work 🔥

You can watch @imVkohli and @BCCI’s other test superstars tomorrow at the Uptonsteel County Ground.

Bumrah and few others to play for Leicestershire-

India intends to give match practice to every player in the team under new coach Rahul Dravid. The former India captain marks his first overseas visit with the Indian team for test cricket. According to sources, Rishabh Pant, Cheteshwar Pujara, Jasprit Bumrah and Prasidh Krishna are set to play for the home side. The club released a statement which read “India superstars Cheteshwar Pujara, Rishabh Pant, Jasprit Bumrah and Prasidh Krishna will all team up with the Leicestershire squad, captained by opening batsman Sam Evans. LCCC, BCCI and the ECB have all agreed to allow the four players from the visiting camp to be part of the Running Foxes side, in order to allow all members of the travelling party to participate in the fixture (subject to fitness). The match will be played with 13 players per side to provide further flexibility and help manage bowling workloads”