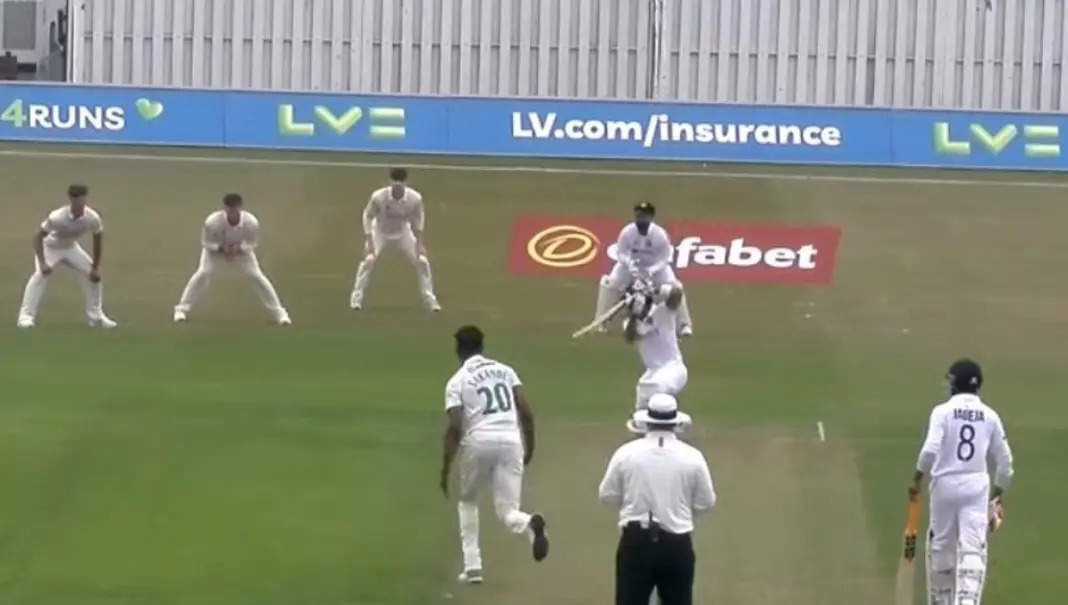 India are finally on the field of play as they prepare for the final test against England. The match was to be played at Manchester but a spate of COVID cases pushed it back a year. The match is now scheduled to begin on 1st July at the Edgbaston ground in Birmingham. The entire Indian team is playing a game against Leicestershire with Pant, Pujara, Krishna and Bumrah playing for the county side. India won the toss and chose to bat with a decent cloud cover for the bowlers.

Former Indian captain Kohli walked into bat when the current Indian skipper Rohit Sharma was out for 25. The score was reading 50 for 2, the moment of the game came towards the end of the 24th over. Kohli was 4 not out off 19 balls, when he got a juicy half volley outside off stump and he beautifully drove the ball to the boundary.

Shubman Gill and Rohit Sharma opened the innings for India and added 35 in quick time. The first wicket to fall was Gill who scored 21 off 28 balls before he was dismissed by Will Davis. Rohit Sharma playing on the anniversary of his 15th year of International debut, played some delightful shots. The Indian captain though was in for the want to play the pull shot when he fell for 25. He became Roman Walker’s first of 5 wickets, as he went on to dismiss Hanuma VIhari next for 3. Prasidh struck next having Shreyas Iyer out for a duck caught by Pant.

Walker struck again when he had the key wicket of Ravindra Jadeja for a run a ball 13 to leave India tottering at 81 for 5. Srikar Bharat walked in and added 57 runs with Kohli as both looked aggressive. Kohli was out for 33 against the run of play to become Walker’s 4th wicket, and it was soon wicket number 5 as Walker had Shardul Thakur castled for 6.

When Shardukl Thakur fell the Indian score was reading 148 for 7, the home side looked to be getting ready to have a bat. Srikar Bharat though showed his class with the bat. First he added 66 runs with Umesh Yadav for the 8th wicket as the duo were aggressive in their intent. Yadav scored 23 off 32 balls before becoming Davis wicket number 2. Shami who scored a 50 during the Lord’s test last year walked in and seemed to batting on muscle memory. Bharat in the meanwhile scored his 50 and was pushing on the scoring rate past 4. India ended the day at 246 for 8 from 60 after rains stopped play for the 3rd time. Bharat was on 70 off 111 balls, while Shami was 18 not out.