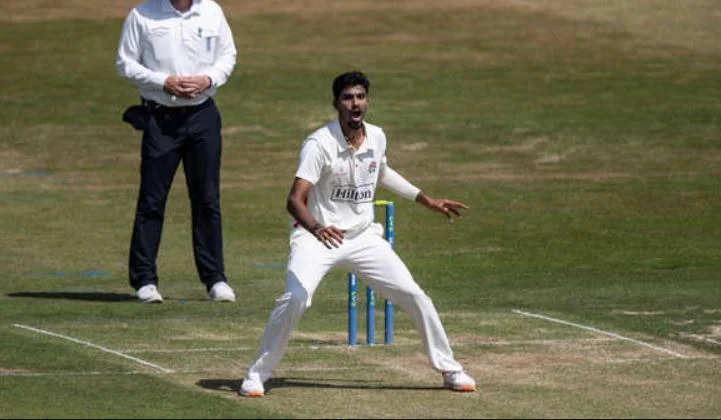 Indian cricketers are a busy bunch at the moment with the international commitments keeping them busy. Players who aren't part of the Indian at this moment are trying to win back their place by playing in the county championship. The likes of Pujara, Umesh Yadav, Navdeep Saini and Washington Sundar are putting good use of their stint in the English domestic circuit. One of the games in the latest round of games featured Lancashire against Kent with Sundar going up against Saini who is playing for Kent. The Match was a roller coaster affair as both the teams played well but Sundar's Lancashire came out on top..

Kent were given the task of chasing 312 for a win during the final innings of the game against Lancashire at Manchester. The incident in question happened when Jordan Cox was batting against Sundar. Cox was batting on 1 off 5 balls when Sundar bowled a loopy ball outside off stump. The Batsman went for a forward defence only to see himself being bowled through the gate. The ball spun so sharply that it pitched on off stump and went on to hit the top of leg stump. Many call this a classical off spinners dismissal which is a dream for many and Sundar achieved that dream with a peach of a ball. Once the wicket fell, the batter was in utter shock as the Lancashire players swarmed to Sundar to congratulate him.

Batting first, Lancashire could manage only 145 on the board, Luke Wells (35) and captain Steve Croft with 31 were the stop scorers. Sundar scored mere 6 runs with the bat, as Saini picked 3/63 with the ball in the first innings. Kiwi international Matt Henry picked 5 wickets with the ball. Kent replied with 270 on the board with Jack Leaning scoring 90 along with 64 from Grant Stewart and 59 by Joe Denly. Sundar did not pick a wicket with the ball as Lancashire had given a huge first innings lead to Kent.

Lancashire post a massive score in the 2nd innings -

faced with a deficit of 125, the Manchester based outfit started with a first wicket stand of 54 between Jennings and Wells. Opener Wells who had top scored in the first dig with 35 followed it up with 98 from 139 balls, as Josh Bohanannon scored a century 134 off 239 balls with 18 fours to his name. Ron Jones with 65, Steven Croft 41 helped the Lancs reach 436 on the board.

Bowling with a lead of 311, the Lancashire bowlers did not give Kent batters any respite as they had them at sea. Apart from Bell Drummond who was 69 not out, none of the other batters could do much with the bat. Only Ollie Robinson with 21 was the batsman to score some decent runs to support the Kent number 3 batter. Tom Bailey picked 5, as Sundar ended up with 3 wickets and Will Williams picked 2.

Sundar began his county stint with scores of 2 and 34 against Northants as he picked a fifer in his very first innings he bowled. So far Sundar has picked 9 wickets with the ball and scored 52 runs with the bat.