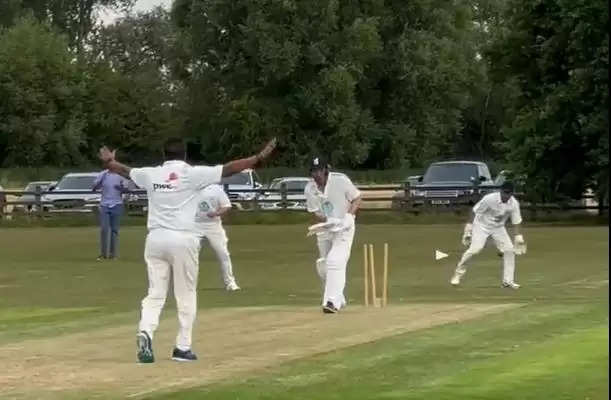 Cricket like any sport has romance attached to it, and it can bring out the best of emotions. While watching current day cricketers can give us a high, watching former greats takes down memory lane. For children who have grown up in the 90’s the name Wasim Akram is a well known one. The left arm pacer was one of the best exponents of swing bowling with pace. The former Pakistan captain was recently part of a Celebrity game for Charity honoring the life and times of Shane Warne.

England and Pakistan enjoyed some amazing rivalry during the 1990’s. Wasim Akram and Michael Atherton were the lead characters of the duel as both were the lead players and on occasions captains of the side. Atherton was known for his strong defense and ability to grind out attacks. The two recently were part of a charity game honoring the great Shane Warne who passed away on 4th March, 2022. Akram bowled a perfect yorker to get rid of Atherton. Akram was seeing celebrating the wicket of his former Lancashire team mate Atherton. Taking to twitter, Akram wrote “sorry @athersmike we might get older but some things will stay the same”

Sorry @Athersmike we might get older but some things will stay the same 😉! https://t.co/k2SnvKGvX5

Akram and Atherton two legends of the game –

Wasim Akram made his debut for Pakistan in 1984 in ODI cricket and test debut a year later. Considered a huge weapon for Imran Khan, the left arm quick played a big role in the 1992 world cup win. Akram got two wickets in one over to swing the game in Pakistan’s favor. Akram played 104 test matches and picked 414 test wickets, with 25 five wicket hauls and 5 ten wickets in a game. He also scored 2898 runs with a best of 257 and 3 centuries and 7 fifties to his name. Akram also played 356 ODI games and became the first bowler to pick 500 wickets. He ended his career with 502 wickets with 9 five wicket hauls and economy of 3.9. Akram also scored 3717 runs with the bat with 6 half centuries and a best of 86.

Michael Atherton played  115 tests for England and scored 7728 runs with a best of 185. He had 16 centuries and 46 fifties to his name and an average of 37. He played just 54 ODI games and scored 1791 runs with 2 centuries and 12 fifties. He retired from the game in 2001 post the Ashes against Australia and since has become a well known TV and media personality. Atherton was best known for his duel against Allan Donald during the Nottingham test of 1998.