Watch! Will Jacks takes a stunning which has the social media going crazy 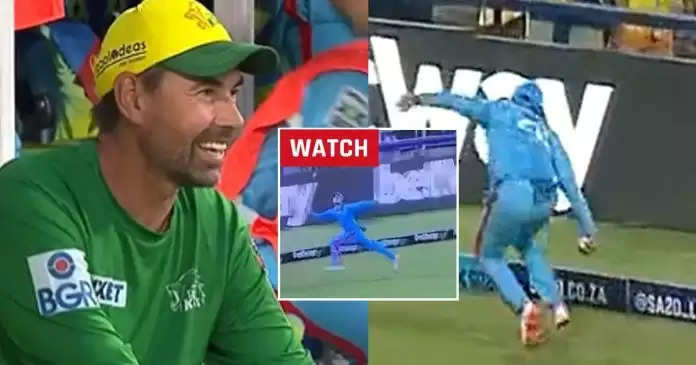 South Africa’s newest T20 league SA20 has been attracting a lot of crowds. The fans have been lucky to witness some amazing batting and bowling during the course of the tournament so far. The game on Tuesday saw Pretoria Capitals take on the Johannesburg Super Kings at the bullring Wanderers in Johannesburg..

Pretoria won the toss and chose to bowl first as the visiting side were sitting 3rd in the table from 8 points from their first 3 games. Joburg Super Kings on the other hand had played 3 games as well losing 2 and winning just 1. The home team were under pressure pretty early in the tournament.

Will Jacks stuns the crowd with a one handed catch –

The incident in question happened in the 4th ball of the final over with Gerald Coetzee facing Eathan Bosch. The fast bowler got a low full toss  from Bosch and he decided to flick the ball towards the boundary for a six. Will Jacks made the run and took the catch as if plucking oranges from the tress. The catch was so easy and effortless it had the crowd and JSK coach Stephen Fleming speechless.

Put into bat first, Faf Du Plessis and Reeza Hendricks came out to open the batting. The pair added 45 in 7.1 overs as Du Plessis scored 27 off 16 balls with 5 fours. Hendricks on the other hand struggled to get going as he scored 45 off 50 balls with 4 fours and a six.

The star of the show was Leus Du Plooy who scored 75 off mere 40 balls with 7 fours and 5 sixes. None of the other batters reached double figures as the Pretoria bowlers kept the run scoring in check. Eathan Bosch picked 3 wickets while Anrich Nortje got 2.

Chasing 169 to win, the Super Kings bowlers had the capitals under check with wickets at regular intervals. Phil Salt top scored with 15 ball 29 runs with 4 fours and a six. 38 year old Aaron Phangiso with 4/32 did the star turn for Johannesburg as they had Pretoria Capitals all out for 162. West Indians, Alzarri Joseph and Romario Shepherd took 2 wickets each as the super Kings won their 2nd game of the tournament.