Watch! Young Ball Boy aids the fielder in a confusing moment during the IL T20 game 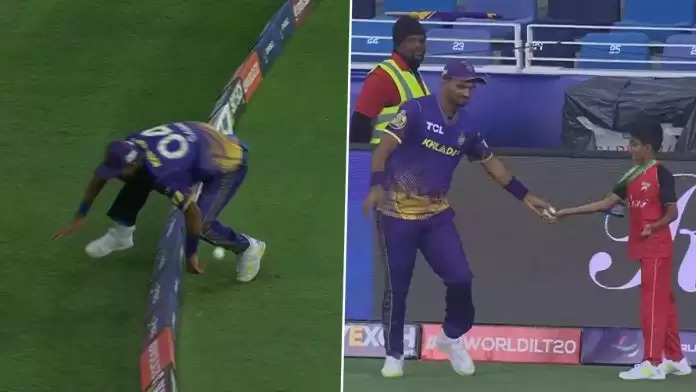 IL T20 is the latest league in the ever growing world of franchise cricket. It began on 13th January this year in what is a 6 team league. Desert Vipers, Gulf Giants, MI Emirates, Dubai Capitals, Sharjah Warriors and Abu Dhabi Knight Riders are the 6 teams participating in this tournament.

Young ball boy comes to the aid of the fielder –

The incident in question happened during the game between Abu Dhabi Knight Riders and Desert Vipers. The game was being played at the Dubai International stadium on Wednesday. Sunil Narine was bowling to Sherfarne Rutherford with the Vipers needing 16 runs off 22 balls.

Rutherford cut the ball towards the third man as Sabir was running to cut a certain four. Sabir, was quick to pull the ball back into play to limit it to just 3 runs. But before the fielder could make it back to the field, the ball boy entered and threw it to Sabir Ali. This left everyone confused. The umpires conversed and decided to stick with 3 runs to the total with the ball boy being in focus for the rest of the game.

Batting first, the Abu Dhabi team lost their opener Kennar Lewis for 1, while Dhananjaya De Silva fell for 5. Colin Ingram and Brandon King then added 39 for the 3rd wicket. Brandon King top scored with 57 off 44 balls with 5 fours and 2 sixes, while Charith Asalanka scored 26 off 21 balls to help Abu Dhabi reach 133.

The vipers coast home to easy win thanks to Alex Hales –