Watch! Zainab Abbas the Pakistani anchor has a hilarious tumble during SA20 game 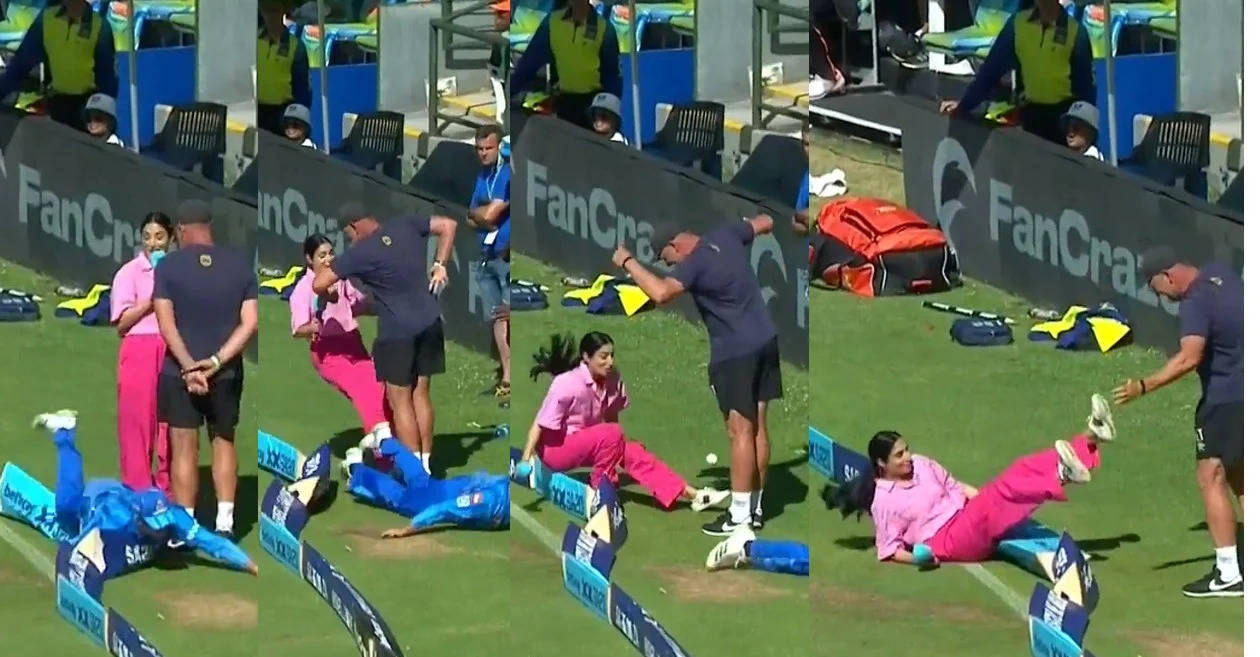 T20 cricket brings in a lot of excitement on and off the field. There are some moments which are talked about for a long time and become classic on the social media platforms. Pakistani anchor Zainab Abbas was in the middle of one such moment which has sent the social media users into a frenzy.

Zainab Abbas has a huge tumble –

Sunrisers Eastern Cape were facing the Mumbai Indians Cape Town team on Wednesday. The incident happened in the final ball of the 13th over with Sam Curran bowling to Marco Jansen.

Jansen was batting on 1, when Curran bowled one at Jansen’s leg stump line and was swung across the line for a 4. At that moment, Zainab Abbas was interviewing someone in the boundary line and had a fallen when the fielder while trying to save the 4 also collided with her and she was seen falling on the ground.

"This is coming straight for us.." 🫣@ZAbbasOfficial, you good? 🤣@CapeTownCityFC your manager somehow avoided the contact! pic.twitter.com/32YPcfLCMf

Once this incident happened, the commentators burst out laughing off the mic. Even the fans seemed to find this situation really funny. Zainab Abbas, though took it sportingly and was heard telling the camera she was fine and sent the feed back to the commentators.

Sunrisers won the toss and chose to bowl first and had got the wicket of Brevis for 6 with the score reading 7/1. From there Rickelton and Roelofsen added 102 runs for the 2nd wicket. Rickelton scored 46 off 36 balls with 4 fours and a six, while Roelofsen scored 53 off 36 balls with 7 fours and 2 sixes. MI Cape Town’s middle order wobbled a bit before Odean Smith with 25* off 13 balls and Delano Potgieter with 21* off 13 balls helped them to reach 171.

Chasing 172 to win, Sunrisers were 101/6 at one stage still needing 71 runs off 35 balls. That’s when Marco Jansen decided to show his batting prowess as he scored an amazing 66 not out off 27 balls with 3 fours and 7 huge sixes. Jansen added 53 runs for the 7th wicket with Brydon Carse who scored just 5 runs. On the back of such an assault Sunrisers won the game with 3 balls to spare and 2 wickets in hand.