Watch! Zimbabwe players crazy celebration in the team bus after a famous win over Australia 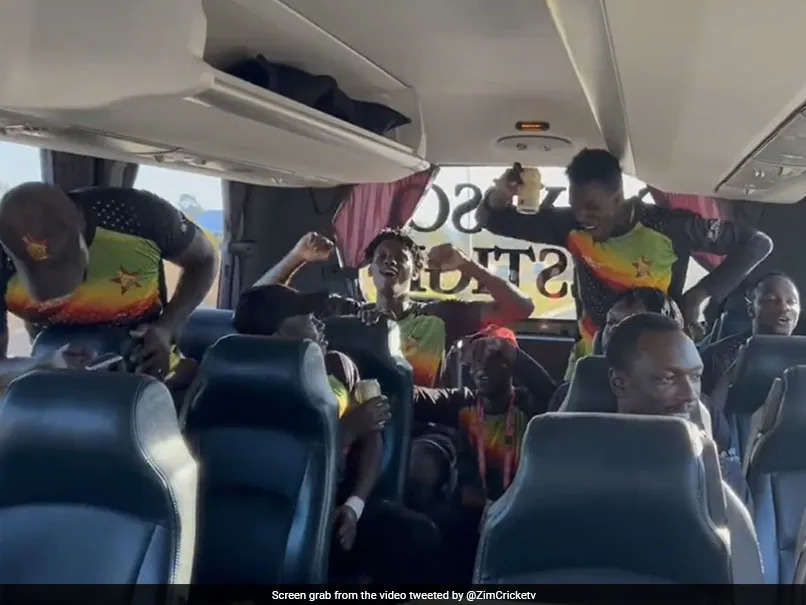 World Cricket on Saturday got a huge surprise and amazing shock when Zimbabwe beat Australia. The men from African continent  beat the 5 time ODI world champions on Saturday by 3 wickets at the Townsville stadium. Even though they had lost the series already on their short 3 match ODI series, Zimbabwe caused a massive upset when they beat the hosts. This win has seen the upswing in Zimbabwean fortunes as they had beaten Bangladesh in the T20 and ODI series recently to bring the minnows back into some sort of momentum.

The festive and happy spirit of the Zimbabwe team after the win over Australia, was caught by the Zimbabwean team official twitter handle. The entire team could be heard singing songs and having a whale of a time. The players could be seen dancing and laughing as the Twitter handle of ZCU wrote “ Castle Corner, see what you've done? But who can blame us! Thanks for the support and inspiration, home or away!”. The 30 second video shared on Twitter saw the mad celebrations in the team bus capturing the happy moments.

#3rdODI | Castle Corner, see what you’ve done? But who can blame us! Thanks for the support and inspiration, home or away! @CastleCornerZW #AUSvZIM | #VisitZimbabwe pic.twitter.com/Vp6VYRWSXU

Warner scores 94 as Australia get bowled out for 141 –

The star of the show was off spinner Ryan Burl in just 3 overs and conceded 10 runs in his spell. Burl began with the wicket of Maxwell, and then ran through the lower order when he had Ashton Agar. It was the off spinner who got the key wicket of Warner before dismissing Starc and Hazlewood to bundle out Australia for 141.

Zimbabwe weather the storm to win the game –

Chasing 142 to win, Zimbabwe were rocked early and lost 3 quick wickets to be placed at 44 for 3. Captain Regis Chakabva was not out on 37 from 72 balls with 3 fours while opener Marumi scored 35 off 47 balls. Kaitano with 19, Munyonga with 17 and Burl with 11 scored the runs to help Zimbabwe over the line with 3 wickets in hand and 11 overs to spare.