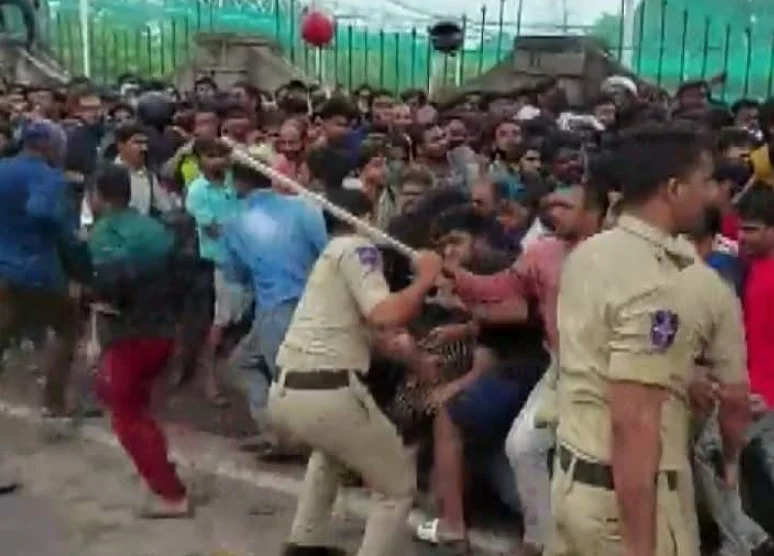 Indian cricket is always been known for its crazy fans and the passions that run high in the country. Perhaps for the first time after the COVID-19 pandemic phase, Indian cricket is truly on the road. India is hosting Australia for a short 3 match T20 series, with games in Mohali, Nagpur and Hyderabad. The tickets for the games are selling like hot cakes and the fan anticipation is pretty much expected.

Mohali witnessed a full house as India and Australia took to the field for the first time. The same is expected on Friday, during the 2nd T20 at Nagpur. The two teams have a short turn around as they travel to Hyderabad post the game on Friday. The final game on Sunday will be the 3rd and final T20 at the Uppal Stadium at Hyderabad. The southern city is hosting a game after a long time.

Pandemonium and chaos as tickets go on sale –

Fans thronged to the stadium to grab hold of the tickets for the game on Sunday. There was mass chaos as a huge crowd assembled for the tickets. This meant that the police had to resort to Lathi-Charge. The entire episode was caught on camera and posted on Twitter.

Twitter user by the name Ashish posted a video of the entire episode and wrote “chaos prevailed outside the gymkhana ground of secunderabad where thousands gathered to buy #IndiavsAustralia #T20 match tickets. Police use mild force #Hyderabad.

First match in Hyderabad for a while –

It has been nearly 3 years since Hyderabad hosted a T20 match. The last time they hosted was the game between India and West Indies. The visitors had posted a massive 207 on the board. India chased down the target in 18.4 overs, with Kohli top scoring with 94 not out and KL Rahul scoring 62.