Watch: Wasim Akram snaps before the start of the game against India 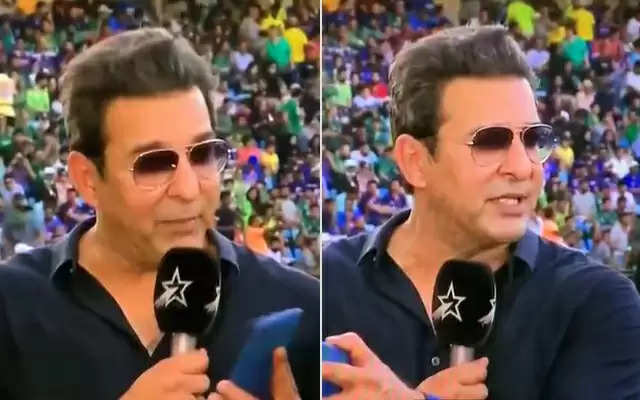 It was an exciting game of cricket as India took on Pakistan on Sunday. It was both the teams first game of the tournament and the excitement was running high. India won the toss and chose to bowl first. Captain of the Indian team, Rohit Sharma sprung a huge surprise when he decided to bench Rishabh Pant in favor of Dinesh Karthik for the game. The Indian team also were looking for the revenge for the loss from the T20 World Cup that they suffered last year at the same venue. Pakistan too had suffered the loss of Shaheen Shah Afridi and Mohammad Wasim Jr due to injury ahead of the start of the tournament.

A game between India and Pakistan brings the best of the mood between. Not only the fans but also the broadcasters are looking to encapsulate the mood in the ground. Everyonr wants things to go smoothly. Sunday, was no exception as the massive crowd at Dubai international stadium were waiting for the start of the game. Loud cheers followed as the two team captains, Rohit Sharma and Babar Azam came out for the toss. There was even bigger applause when India won the toss and elected to bowl. Former Pakistani legend Wasim Akram though was left angry and miffed at the broadcast team.

Once India won the toss and it came to light that Pakistan was batting first, the line ups of the two teams were put up. One glaring error was that,Hasan Ali was shown to be playing, infact it was Shahnawaz Dahani who was playing the game. This irked the former Pakistani captain to no end as he said. " I am very happy with the Pakistani playing XI. I wanted Shahnawaz Dahani to play but Hasan Ali is playing. I thought.. Dahani is playing , but obviously he is not in the team. Guys are you sure this is the playing XI? Obviously I was wrong... I was told by yousuf that Dahani is playing. So if the batting coach does not know there is something wrong somewhere "

Akram calmed down after losing his cool -

Mayanti Langer, also agreed with Akram and said that he was right about Dahani playing the game. She tried to placate the former Pakistani left arm seamer. Akram though was far from happy As he said " Don't keep me happy, keep that guy happy who is putting the wrong team out there guys. It's a big game. It's not a small mistake. It's fine now"

The action on the field was nothing short of dramatic as both the teams went at each other. India at the end of the day held their nerves and won the game as Hardik Pandya scored 33 runs from 17 balls. India made a good start to the tournament as they now face off against Hong Kong on Wednesday in their second game of the tournament.