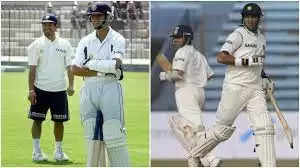 Multan Test 2004 was a game that no Indian fan will ever forget in a hurry. It was India’s first test in Pakistan for 15 years, a place where the great Sachin Tendulkar had made his international bow. When he first played cricket in Pakistan he was just a 16 year old who was trying to make his name. At the age of 30 he was back and he was already the best player in the world by a country mile. This was also the game that Sehwag went into the history books becoming the first Indian player to score a test triple ton.

The innings in a nutshell–

India batted first and opener Sehwag and Chopra put on 160 for the first wicket before Dravid who was the captain for the injured Ganguly was out for 6. Tendulkar and Sehwag then added 336 runs for the 3rd wicket before Sehwag was out for 309. Post the fall of Laxman for 29 with the score reading 565, Tendulkar was joined by Yuvraj in the middle. The pair added 110 for the 6th wicket in a quick time scoring at nearly 6 runs per over. Yuvraj was dismissed by Imran Farhat when  he was caught and bowled for 59 off 66 balls.

Yuvraj speaks about the in-famous declaration of Multan test-

When Yuvraj fell, Sachin Tendulkar was not out on 194 and much to the shock of the little master the Indian captain Rahul Dravid declared the innings. Despite India scoring above 4 runs per over and the match still being in the 2nd day, everyone was taken aback by this stand by Dravid. Even Sachin Tendulkar had mentioned how disappointed he was with his decision in his book. Speaking about the incident Yuvraj said this while speaking to Sport18 “We got a message in between that we had to play fast, and we were going to declare, He could have got those six runs in another over and we bowled 8-10 overs after that. I do not think another two overs would have made a difference to the Test match If it was the third or the fourth day, you have to put the team first and they would have declared when you were at 150. There is a difference of opinion. I think the team could have declared after his 200”

Yuvraj made his test debut in the home test against New Zealand in 2003 and his last test match came 9 years later against England. Post that he was never considered for the longer format of the game. Yuvraj had played 40 games scoring 1900 runs with 3 centuries and 11 half centuries. His best of 169 came against Pakistan in 2007 and he had an average off 33 during his test career. Yuvraj also had picked 9 test wickets in his short test career. Speaking about this the 40 year old said “Eventually, when I got opportunities to play Test cricket after Dada’s retirement, I got diagnosed with cancer. It has just been bad luck. I tried 24x7. I wanted to play 100 Test matches, face those fast bowlers, and bat for two days. I gave it everything, but it was not meant to be”