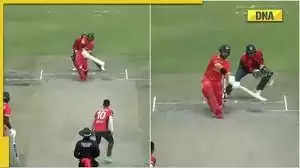 Bangladesh and Zimbabwe played their final T20 match at the Harare Stadium and Zimbabwe won by 10 runs. The game was crucial for both the teams, as the series was tieing at 1-1. During the match, we saw a really tremendous power hitting by Ryan Burl hitting 34 runs in an over by Nasum Ahmed.

In the 15th over, he batted like a pro. Nasum Ahmed came to bowl in the 15th over. Ryan Burl hit 5 sixes and 1 four in Ahmed’s over and scored 34 runs. Ryan hit four consecutive sixes in the first 4 balls. The Zimbabwe batsman tried hitting the fifth ball over the six and he missed it with a difference of 1 meter and it was declared four. The sixth ball bowled the ball outside the off-stump, but Ryan hit a massive six.

Most Expensive Overs In T20I Cricket:

The 79-run seventh-wicket partnership between Ryan Burl and Luke Jongwe proved crucial as Zimbabwe beat Bangladesh by 10 runs on Tuesday to win a Twenty20 international series between the countries for the first time.

After slumping to 67-6 off 13 overs in the third and final match, Burl and Jongwe smashed eight sixes and six fours between them off 31 balls to offer hope to the hosts.

Zimbabwe finished their 20 overs on 156-8 and, in a tense finish at Harare Sports Club, restricted Bangladesh to 146-8 for a 2-1 series triumph.